(April 30, 2015) — The University of Kentucky School of Art and Visual Studies is currently presenting the B.A. (Bachelor of Arts) Senior Show, "alexithymia," showcasing the artworks of 14 graduating art studio seniors. The show, on display now, will conclude with a reception from 6-8 p.m. Friday, May 1, at Barnhart Gallery, in Reynolds Building #1. Both the exhibit and reception are free and open to the public. 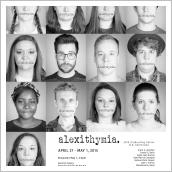 An art studio major and published photographer, Grant Aumiller's work is known for eye-catching commercial based photography and design. Growing up in Danville, Kentucky, Aumiller pursed his creative talents throughout high school. He was introduced to photography in college, which led him to the UK School of Art and Visual Studies where he developed a passion for the still image. He uses a variety of mediums and techniques in his photographic practice including digital and film photography. A former UK football player, Aumiller works as a graphic designer and plans to pursue a full-time career in freelance photography, shooting editorial, commercial and wedding photography.

Crystal G. Bolin will show work in ceramics, fiber and photography. A Louisiana native and U.S. Air Force veteran, she is a mother to a toddler and wife to Chris Bolin, also an Air Force veteran. Her inspirations come from the rich culture of her home state, life and change, and from her beautiful experiences in motherhood. Bolin discovered her love for the arts in high school, spending time in ceramics classes. She attended the University of Louisiana at Monroe from 2004 to 2008 where she studied studio art, concentrating on photography, and worked as a photographer for the school newspaper, The Hawkeye. Bolin’s time in the U.S. Air Force gave her a love of change and of adapting to new surroundings. Once at UK, she continued to pursue her art studio degree in mediums of photography, clay and fiber.

Kayla Burton is a sculptor, photographer and filmmaker whose work investigates material and form in the broadest sense. She investigates the idea of modern American culture and human mentality through various concepts and mediums. Burton works as a gallery attendant at the Art Museum at UK. Her work has been exhibited at Open Studio and in the 2013 Carey Ellis Juried Student Art Exhibition. Burton, from Winchester, Kentucky, received first place for her piece “Steel City” in the "Foundations" exhibition, juried by Gary Setzer.

From Louisville, Kentucky, Kyle Campbell graduated from Ballard High School where his interest in photography and visual studies first began. He came to UK as a transfer student from Northern Kentucky University, where he studied graphic design. Campbell works as a senior resident advisor at UK with Residence Life. Recently, he sold his first piece of art to UK Arts in HealthCare; it will be exhibited in one of the residence halls this coming fall. Campbell will be showcasing his most recent photography series, which focuses on Lexington’s North Limestone Community Development Corporation in "alexithymia."

Sam Cooper was born and raised in Wilmore and grew up working for his father at his greenhouse business, and hiking and backpacking in the wilderness of Kentucky and surrounding states. Cooper was active in his local church; played basketball in high school; became an Eagle Scout at age 17; and was named a Kentucky Colonel. During his sophomore year at UK, he worked for the College of Agriculture, Food and Enviroment in tobacco research where he had the opportunity to be close to nature — working with plants on a farm. His art started to reflect his love and experiences in nature. The images used in his artwork are mainly drawn from the environment and an illustrative, design-based mindset. Cooper's current works-in-progress are pieces inspired by the American West wildlife and a series of illustrated characters invented to tell a story. Cooper is a busy freelancer and has also worked as an intern for the Living Arts and Science Center in Lexington.

Luke Francis, a native of Lexington, has been producing art since a very young age.  During his junior year of high school he attended the Kentucky Center Governor’s School for the Arts, in which more than 1,700 rising juniors and seniors audition for 223 spots for the chance to attend an intensive three-week program focusing on their discipline. During this program, Francis found inspiration to continue his artistic career. He focuses on digital and traditional illustration, using a variety of mediums including printmaking (relief printing/screen printing), pen and ink on paper, and Giclée prints. His work, when not creating for others, tends to deal with childhood imagination coupled with human-environmental interaction. Francis is aware that environmental conservation is a problem that many people ignore.

Mackenzie Haag was born in Lexington. She began her college career in the College of Education but later discovered that the School of Art and Visual Studies was where she belonged. She has spent the last five semesters working on her skills in various types of art media including drawing, painting, ceramics, fiber and sculpture, while honing her skills in digital media and graphic design. She has interned with the College of Fine Arts Communications Department, as well as worked for UK’s Chair of the Department of Theatre and Dance Nancy Jones. Haag currently holds a position at DecoArt as a marketing assistant.

Alexandra Hawkins graduated from Boyle County High School and is an alumna of the Governor’s School for the Arts. She first exhibited in the UK School of Art and Visual Studies "Foundations" exhibition, where she took first place honors in 2011. Hawkins has experience working in many mediums and prefers to work with whichever medium fits the current idea. She is inspired by the natural aesthetics of our world. Hawkins will show large-scale ceramic work with applied design, fired in a variety of experimental methods, as part of "alexithymia."

Color, line, movement, contrast and rhythm form the foundation of the artwork of Andrew Johnson, of Lexington. His fascination with bending and manipulating the bare-basic elements of visual media is approached with the attitude of a scientist. Pragmatic, disciplined, and iterative processes help to express his creativity in pixels, code and ink. Working chiefly with digital illustration and digital 3D, Johnson explores his interests in physics and arithmetic, incorporating fundamental concepts from other fields to create imagery that is straightforward, but laborious to create. Lumps of virtual stone are barraged with simulated raindrops to carve and gash the raw form into an uncanny facsimile to real-world terrain. Struggles with imprecise traditional media, and Johnson's own difficulty with fine motor control drove him to computers for the control necessary to realize his ideas, but that resulted in too much control that lacked natural chaos. The solution was reintroducing the variables of nature into digital media. By simulating natural processes like erosion, combustion and aerodynamics, Johnson's creations are given motion and life, and a past and future.

Rebecca Kozlowski graduated from Garrison Forest School in Owings Mills, Maryland, in 2011. Just months earlier as a member of the Garrison Forest polo team, she was a member of the team that won the National Interscholastic Girls Championship. Hoping to pursue her love of arts and horses, Kozlowski enrolled in UK. She helped establish the UK Polo team, beginning as a varsity member and ending with becoming president of the group. When Kozlowski returns home to Baltimore in the summers, she works at the Maryland Polo Club in Fallston as a groom and became assistant manager during the 2014 summer. As an art student at UK, her love of photography evolved to a love of fibers. Having studied under Arturo Alonzo Sandoval for three years, Kozlowski learned many textile processes but focused on weavings.

In addition to earning her art studio degree this May, Cincinnati native Emily Mae Latham will also receive a bachelor's degree in digital and mass communication and has an associate’s degree in graphic design. Latham was always interested in the human form, specifically close up faces. By starting with digital video, she was able to film herself and make a small motion picture called "Selfie." She later decided to spend more time painting, and her obsession with identity and faces grew and developed deeper concepts in her painting. Much like Jean-Michel Basquiat, Latham was interested in the use of minimalism and conceptualization to reintroduction of the human form. To create a dialogue within her artwork she was able to develop a sense of abstract expressionism. Her work has been inspired by other great artists like Cy Twombly, Julian Schnabel and Francis Bacon.

Connor Query, of Lexington, has studied the arts in all mediums, including sculpture, painting, mixed media and 2-D format. She has sold and shown work at shows like the Woodland Art Fair, Daniel Boone Pioneer Festival, Woodford County Art Fair and Lexington Farmers’ Market. Query attended a summer studio for graphic design at the Art Institute of Nashville, Tennessee. She has also served as art chair to Chi Omega Fraternity for four years. Since 2013, Query has been interning and working part time as the graphics and media designer for an events and management company, LexEffect. In addition to her bachelor's degree in art studio at UK, she will also be finishing an associate's degree in graphic design at the Art Institute of Pittsburgh in 2015.

A native of Louisville, Shamaria Rankin began showing an interest in clay, photography and needlepoint during elementary school.  By 2006, Rankin received her first camera and began documenting her ideas in photographs and video. She also helped create an organization called Ethics, a local group involving minorities working to create a better community. At UK Rankin is a recipient of the William C. Parker Scholarship. She has participated in FUSHION and the Visual Arts Association where she learned the functions of a film camera and silk painting. Her ideas have progressed with vivid use of color and manipulation of tools. She uses raw silk, stretching it on wood and painting the entire image with dye. Next, she works with needles, fusing it together with wool and trimming the edges. The end result of these pieces are organic shapes hung as a panel about 28 inches high. Rankin has also explored arts administration through an internship with InteriTEA, a local tea company.

For more information on "alexithymia," contact Kyle Campbell at kpcampbell9@gmail.com.

The UK School of Art and Visual Studies in the UK College of Fine Arts is an accredited member of the National Association of Schools of Art and Design and offers undergraduate and graduate degrees in the fields of art studio, art history and visual studies, and art education.