Complexity of Earth Surface System Evolutionary Pathways has just been published in "online first" form in Mathematical Geosciences. The abstract:

Evolution of Earth surface systems (ESS) comprises sequential transitions between system states. Treating these as directed graphs, algebraic graph theory was used to quantify complexity of archetypal structures, and empirical examples of forest succession and alluvial river channel change. Spectral radius measures structural complexity, and is highest for fully connected, lowest for linear sequential and cyclic graphs, and intermediate for divergent and convergent patterns. The irregularity index b represents the extent to which a subgraph is representative of the full graph. Fully connected graphs have b = 1. Lower values are found in linear and cycle patterns, while higher values, such as those of divergent and convergent patterns, are due to a few highly connected nodes. Algebraic connectivity (m(G)) indicates inferential synchronization, and is inversely related to historical contingency. Highest values are associated with fully connected and strongly connected mesh graphs, whereas forking structures and linear sequences all have m(G) = 1, with cycles slightly higher. Diverging vs. converging graphs of the same size and topology have no differences with respect to graph complexity, so complexity change is dependent on whether development results in increased or reduced richness. Convergent-divergent mode switching, however, would generally increase ESS complexity, decrease irregularity, and increase algebraic connectivity. As ESS and associated graphs evolve, none of the possible trends reduces complexity, which can only remain constant or increase. Algebraic connectivity may increase, however. As improving shortcomings in ESS evolution models generally results in elaborating possible state changes, this produces more structurally complex but less historically contingent models. 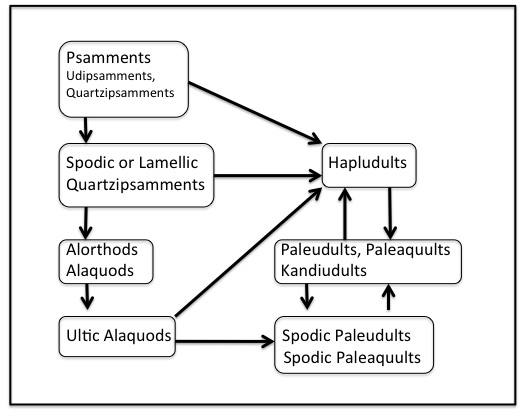 Evolutionary sequence of soils in upland sites of the North Carolina Coastal Plain (Fig. 1 from the article).

Earth surface systems (ESS) develop and change over time. Theories of geomorphic, soil, hydrologic and ecosystem evolution call for either (or both) increasing or decreasing complexity as they develop. Thus, key questions across the Earth and environmental sciences involve the In this paper the focus in on complexity with respect to the evolutionary or successional pattern or pathway itself, rather than complexity of the individual elements. Thus, the concern is with the properties of, for instance, a phylogenetic tree rather than complexity of the taxa represented, or of the network of state transitions in geomorphic evolution or vegetation change rather than properties of the landforms or vegetation communities involved. The question is thus not whether, for example, ecosystems or soils become more complex over time, but whether the network of transitions among system states becomes more or less complex. This is addressed by applying algebraic graph theory methods to some archetype (representative idealized) patterns of ESS development to assess structural complexity, network irregularity, and historical contingency properties. 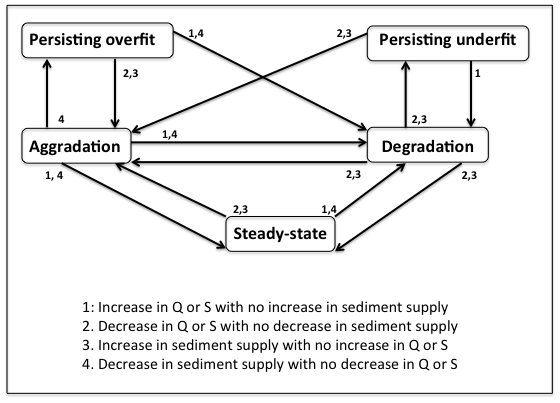 State-and-transition model of channel changes in alluvial rivers (Fig. 3 from the article).

Though I cannot claim to have intended for it to work out this way, this paper is part of a trilogy. Earlier papers sought to measure the degree of historical contingency in ESS  and to quantify the robustness of chronosequences. In the first instance the networks were based on the idea of inheritance between temporal episodes—for example, given a set of relationships among geomorphic factors in a river, those that determine or influence the same factor in a subsequent developmental episode. In the second, chronosequences were used to define system states (stages or phases of the sequence) and possible transitions among them based on observed or inferred changes among states. The path stability (degree to which developmental trajectories are sensitive to disturbance) of the derived networks was determined. The new paper expands on the previous work by considering the actual network of changes over time and how complexity might changes as systems continue to evolve.

OK, so there is a general scientific urge to quantify and a temptation to measure something because you can, but there are also compelling reasons to assess the complexity of evolutionary sequences. Most obviously, if the complexity of such sequences is known or can be computed, questions of the evolution of complexity can be addressed once the (or an) appropriate sequential model has been identified. For several decades it has been widely recognized that simple progress-to-equilibrium models are incomplete and not always applicable, but the understanding of state transitions in ESS is still rudimentary in many cases. Further, as ESS evolve they “compute" intrinsically and store information. Information and complexity are closely related in a statistical sense, but methods for estimating stored information in historical data are currently restricted mainly to relatively long time series of integer or ratio-level numerical data. As entropy (and thus information) is directly related to graph spectral properties described below, the approach developed in the latest paper could be useful in assessing the information stored in an evolutionary sequence.