Hurricane Matthew devastated Haiti and other Caribbean areas, and did tremendous damage in Florida and South Carolina (I rode out the storm in Myrtle Beach, SC with my son Nate, his wife Morgan, and my delightful 2-year-old granddaughter Caroline). By the time it got to North Carolina, winds were down to gale force, but rain was ferocious (15 to 40 cm) in much of eastern N.C. Where I am at the moment, in Croatan, there was "only" about 10 cm of rain, and only gale force winds. However, that was enough, as it usually is, to get some geomorphic work done in the forest.

Below are some photos of trees uprooted by the storm in Croatan National Forest in the Flanner Beach area. Uprooting not only does significant soil mixing, but the pit-mound topography left behind significantly influences hillslope and soil processes for decades (and occasionally longer) thereafter. 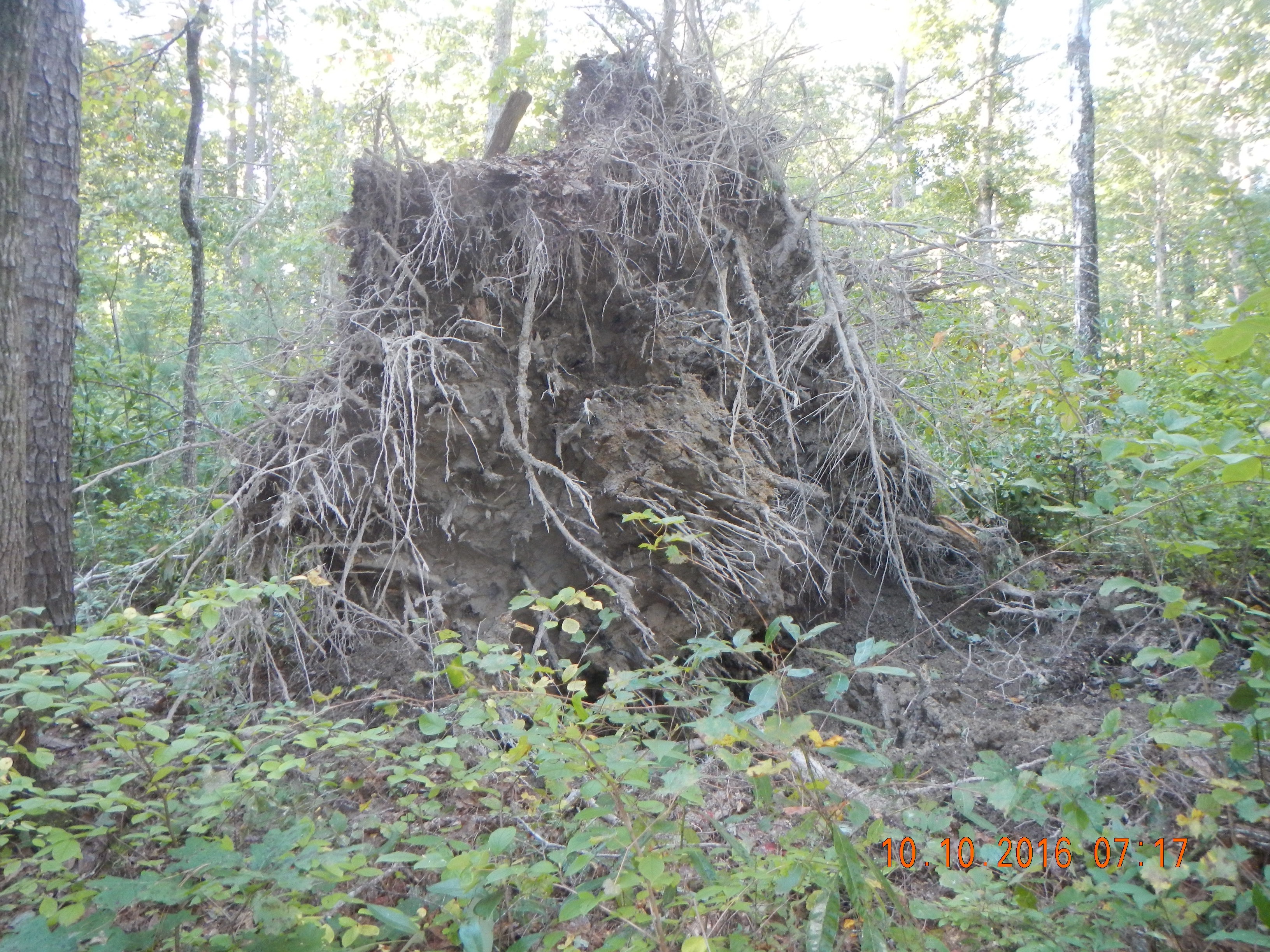 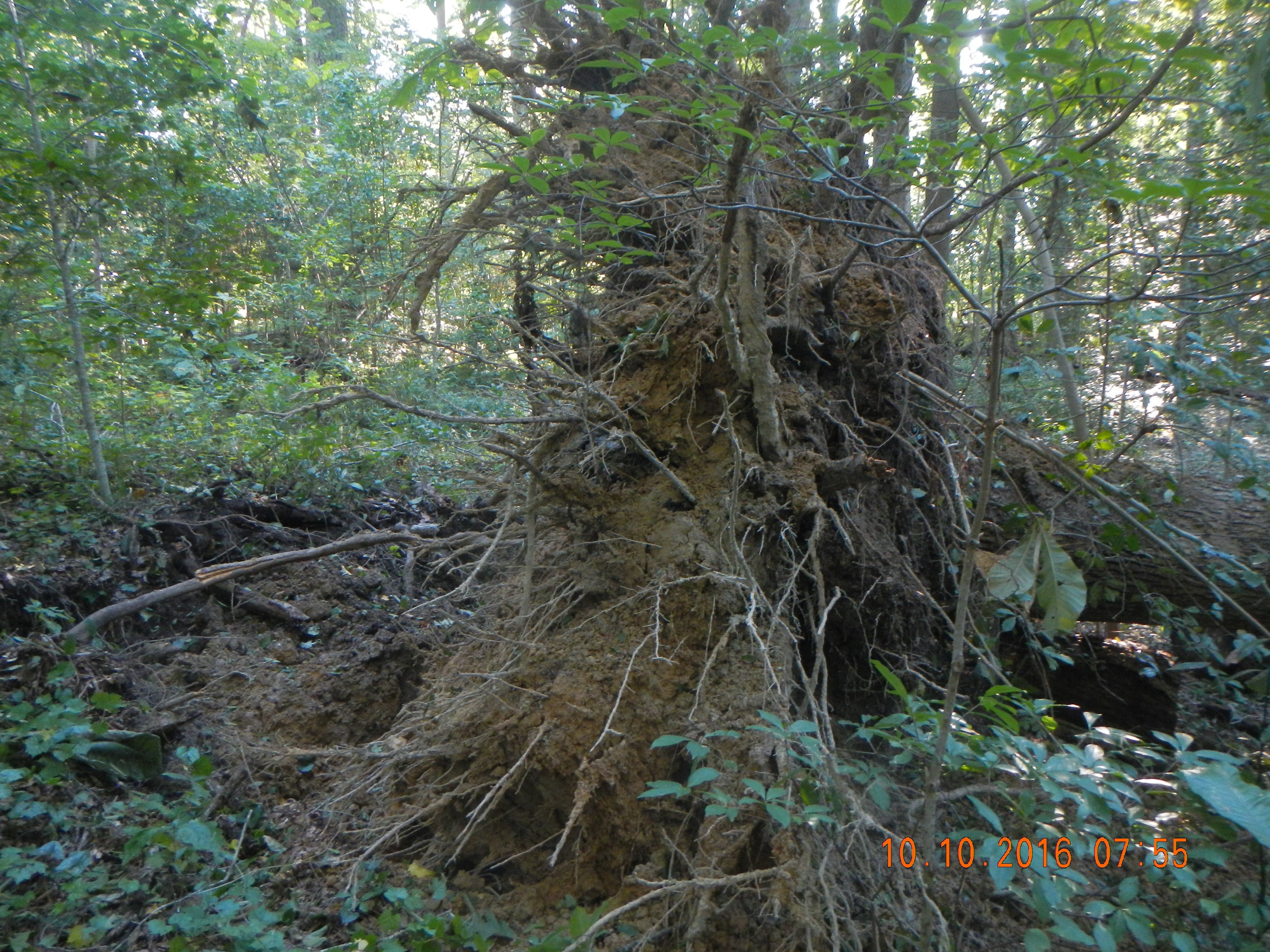 Another example from a cemetery near Maysville, N.C. 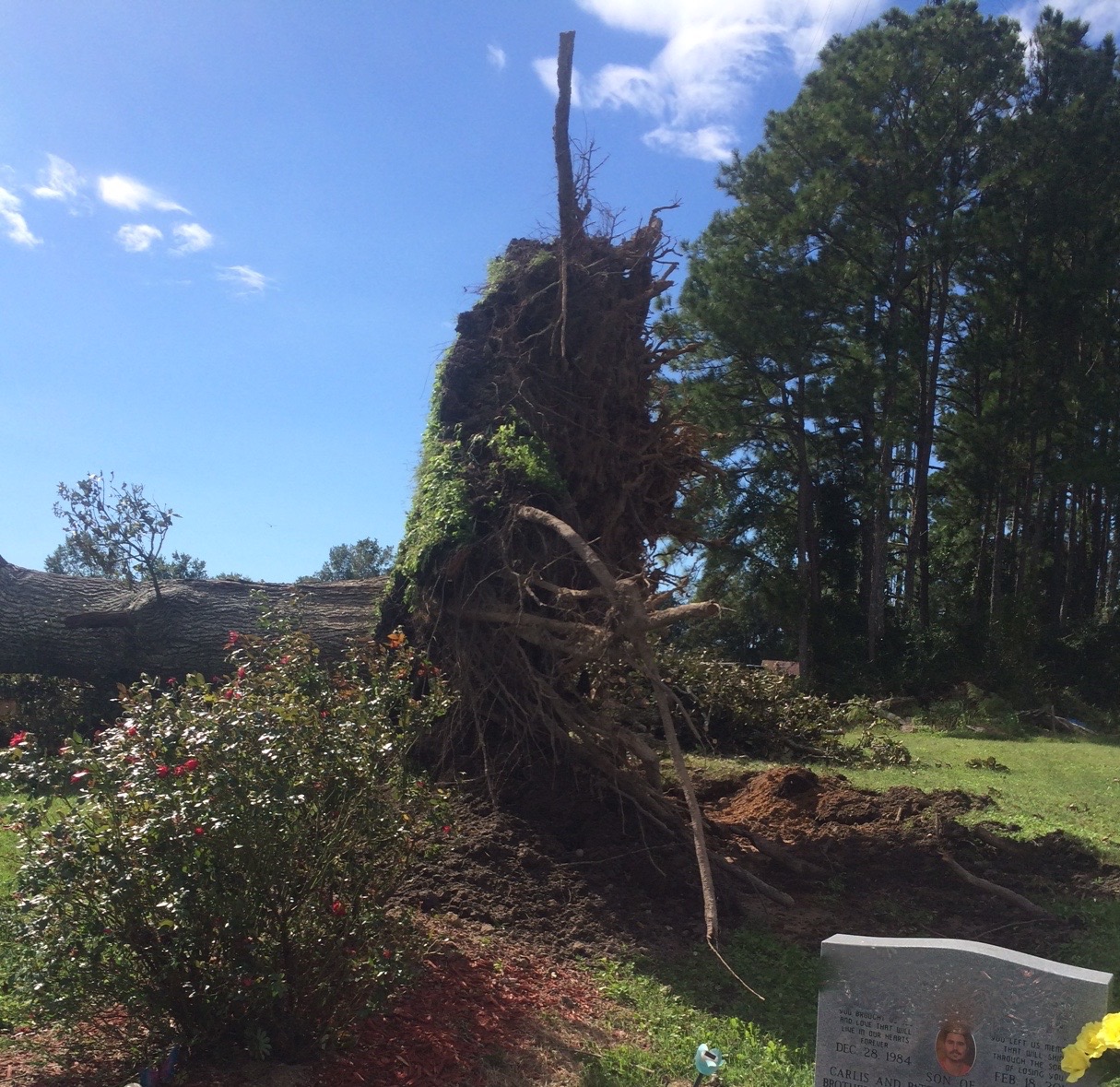 Despite the wet ground (which facilitates uprooting), there was a lot of breakage at the Croatan/Flanner Beach sites. This is common for pines in the coastal plain, which have a deep taproot and are well-anchored. Hardwoods such as oak and beech, in this setting, tend to have shallower root systems and are usually more likely to uproot. Today, though, I saw a number of broken hardwoods: 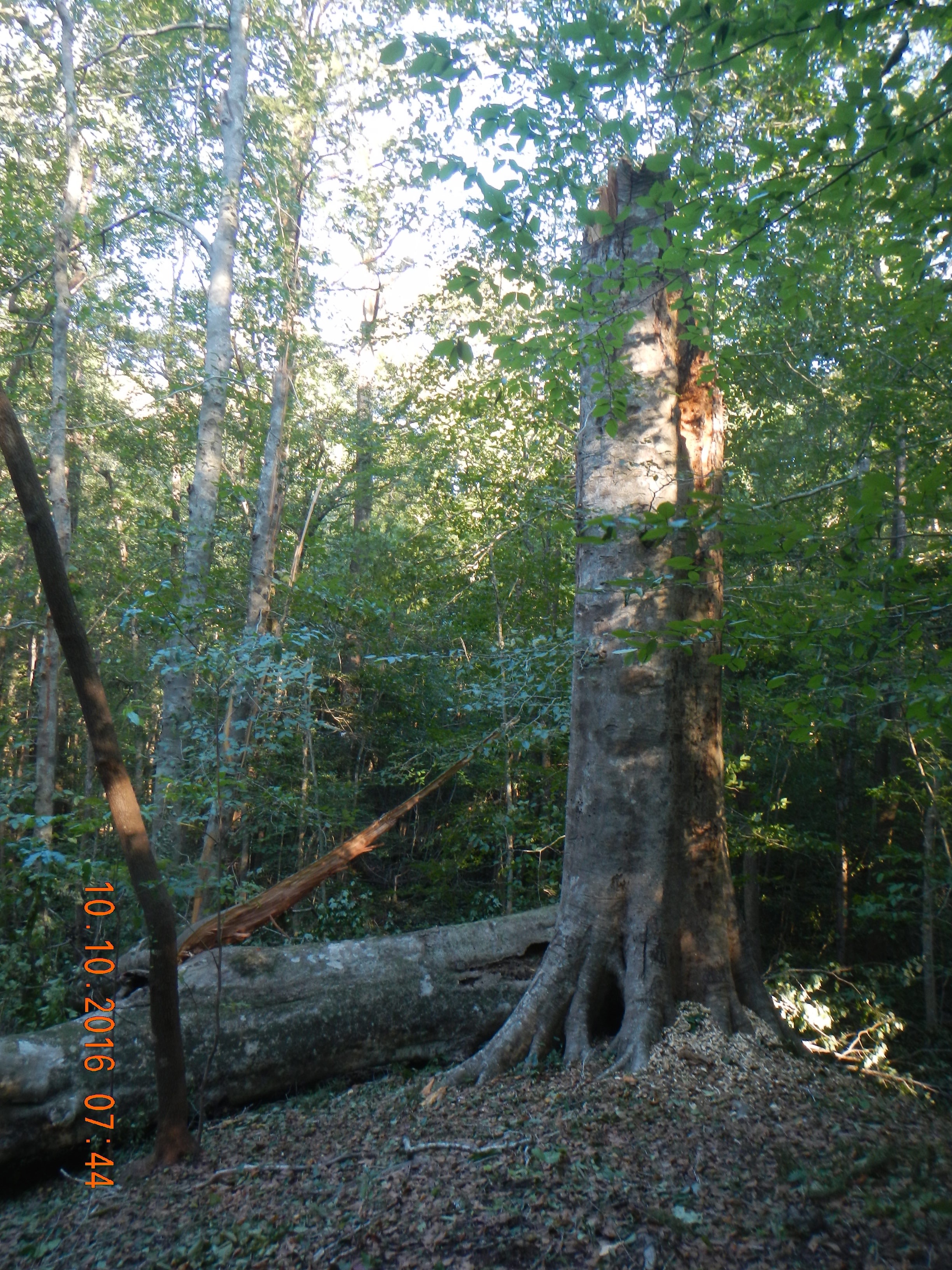 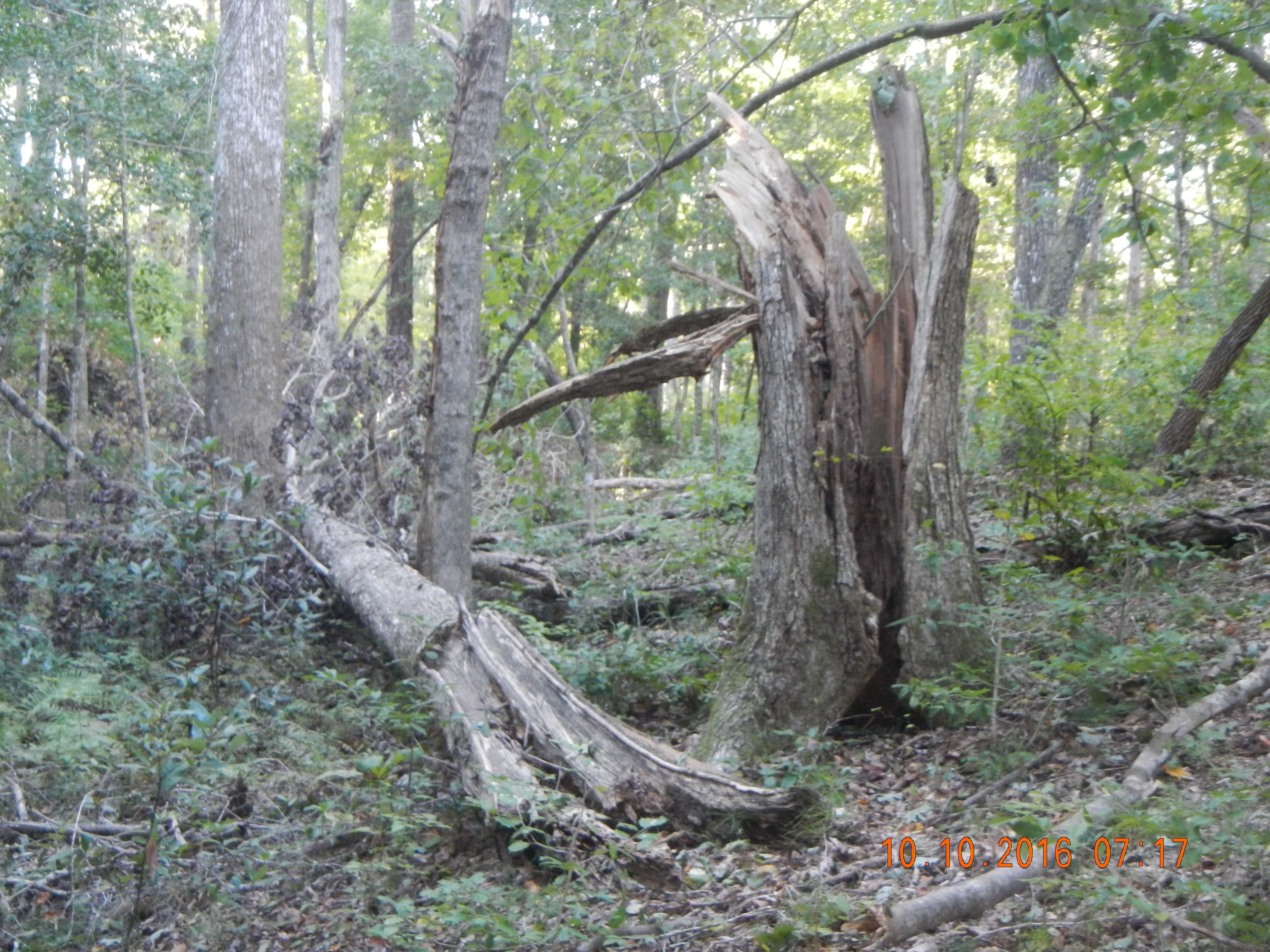 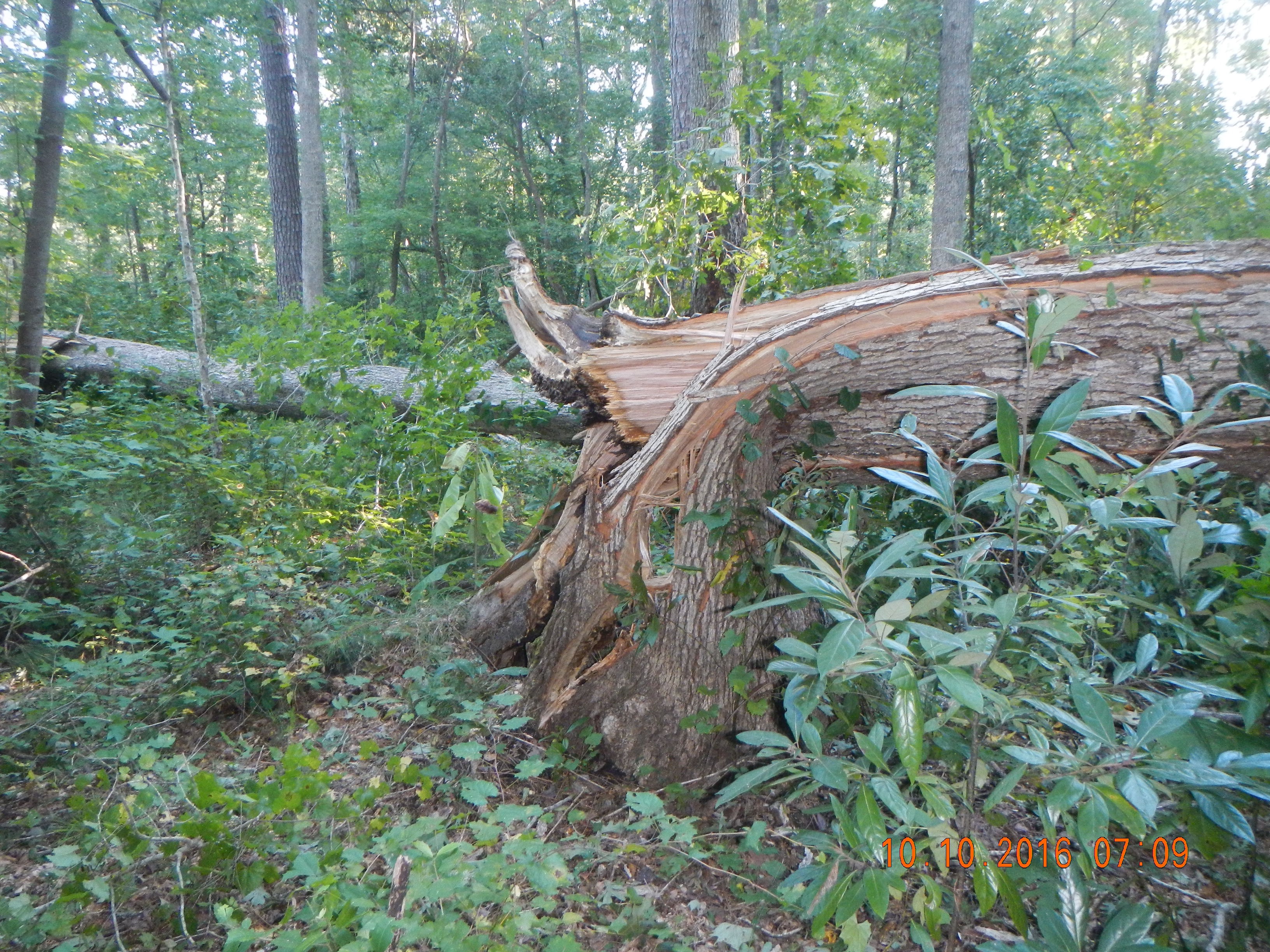 The geomorphic impacts of broken trees are not as immediate as those of uprooting, beyond the sudden addition of a lot of biomass to the surface at one time. However, as the stumps decay, they leave behind depressions (stumpholes) and root channels that strongly influence both surface and subsurface water and sediment fluxes. Below is a stumphole from an older event at the same site; it's more than a meter across. 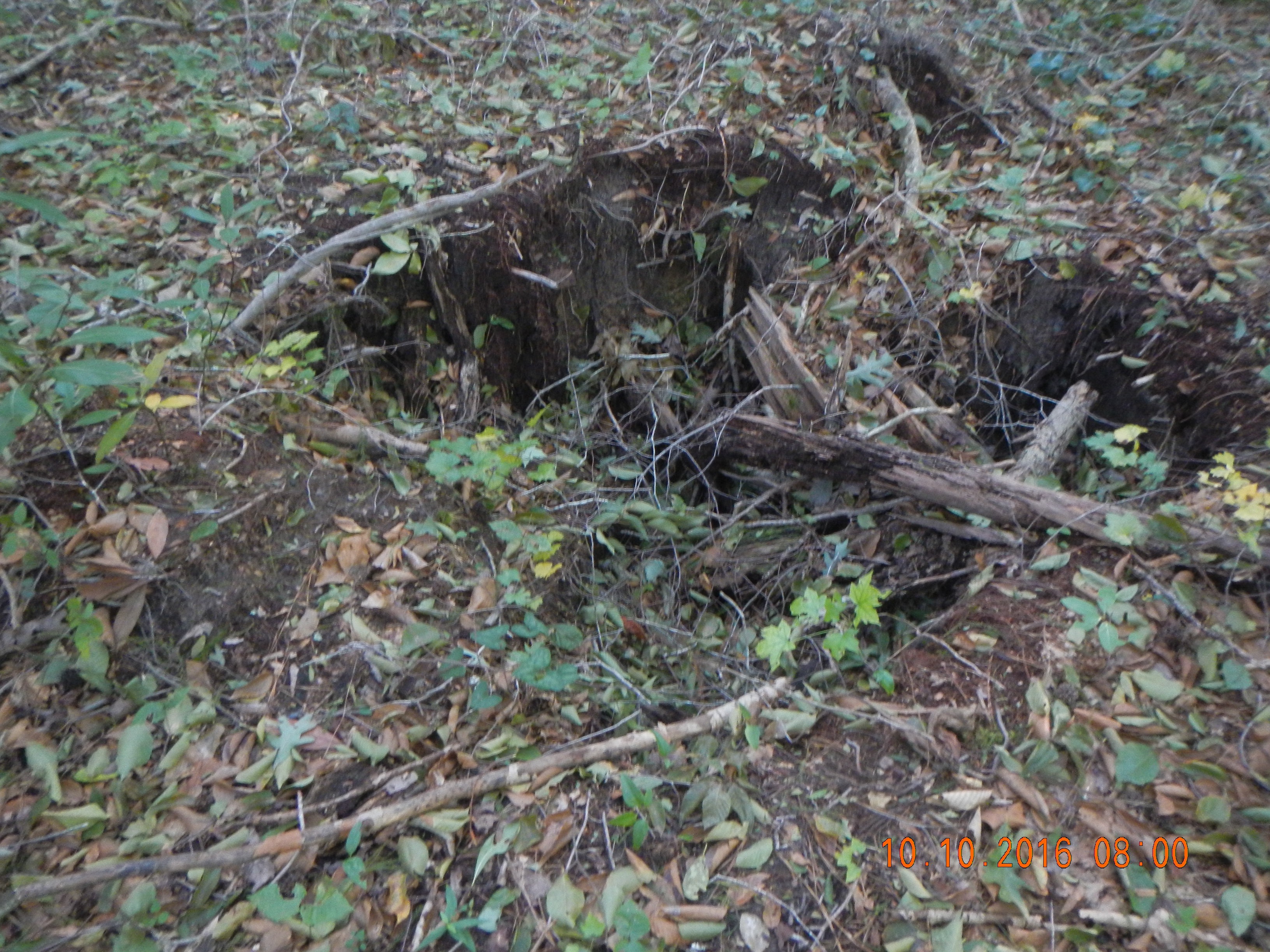 This area is prone to tropical cyclones and midlatitude cyclones (northeasters), so events that cause a number of tree uproots and breakages come along every few years. The Flanner Beach site includes several generations of uproots, for example. How can you tell the old ones from the recent ones? Actually it's pretty easy now; the hardwoods still have their leaves here, and the understory is still green. So the trees uprooted in Matthew still have green leaves, and have crushed green plants below them. In this subtropical environment plants grow fast, and even the soil on a rootwad quickly gets a vegetation cover. Below is a tree that was uprooted several years ago, and cut because it fell across a trail. The rootwad ended up almost upside down above the ground surface, and is now home to a mini-forest of approximately 5-year-old loblolly pines. 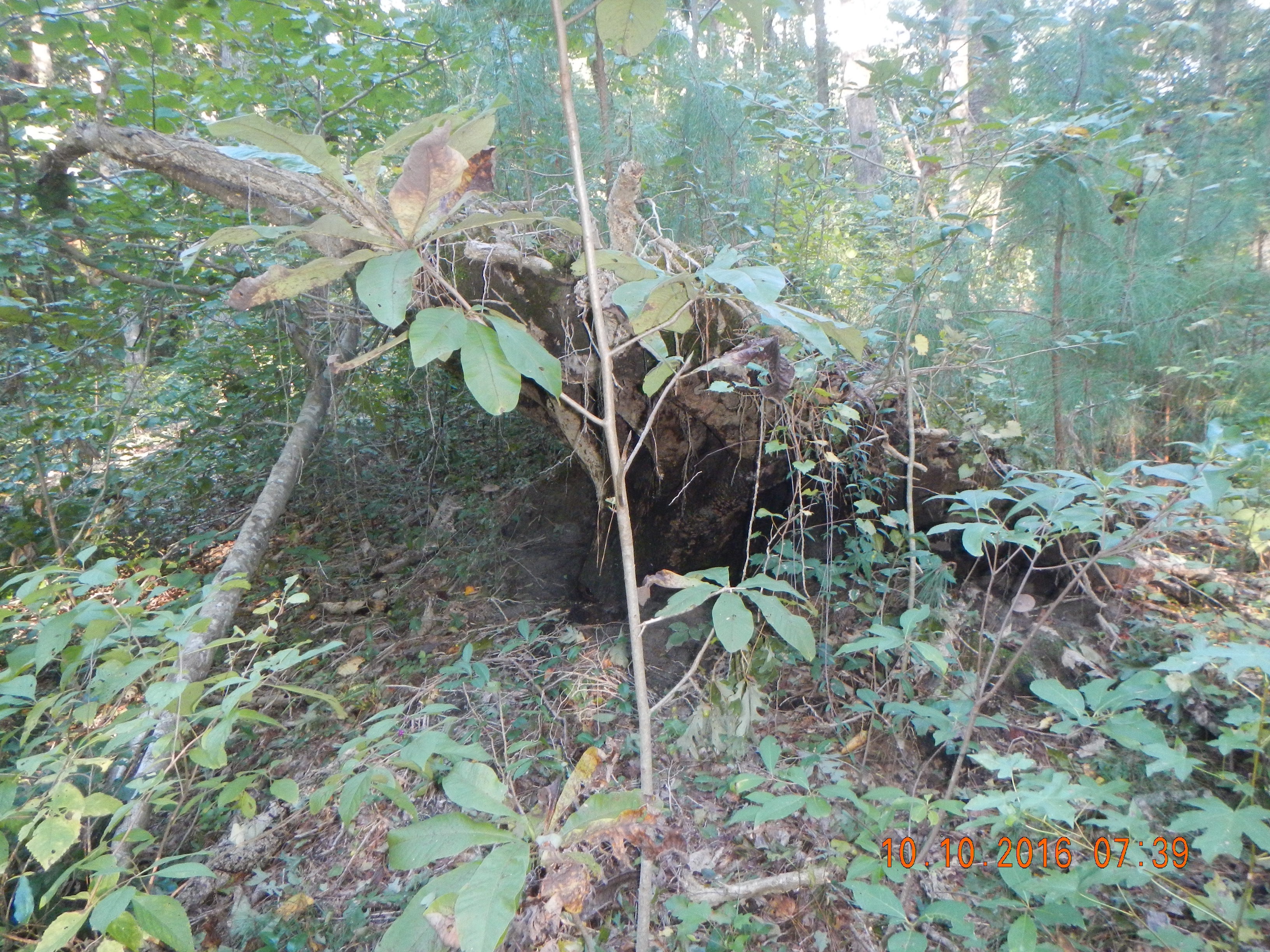 Forest biogeomorphology involves the reciprocal interactions between biological effects of trees on geomorphology, and geomorphic effects of topography, soil formation, drainage, etc. on trees. This Matthew-uprooted tree shows the flattening or spreading of roots that often occurs here due to high water tables--similar phenomena occur in other environments when roots encounter bedrock. 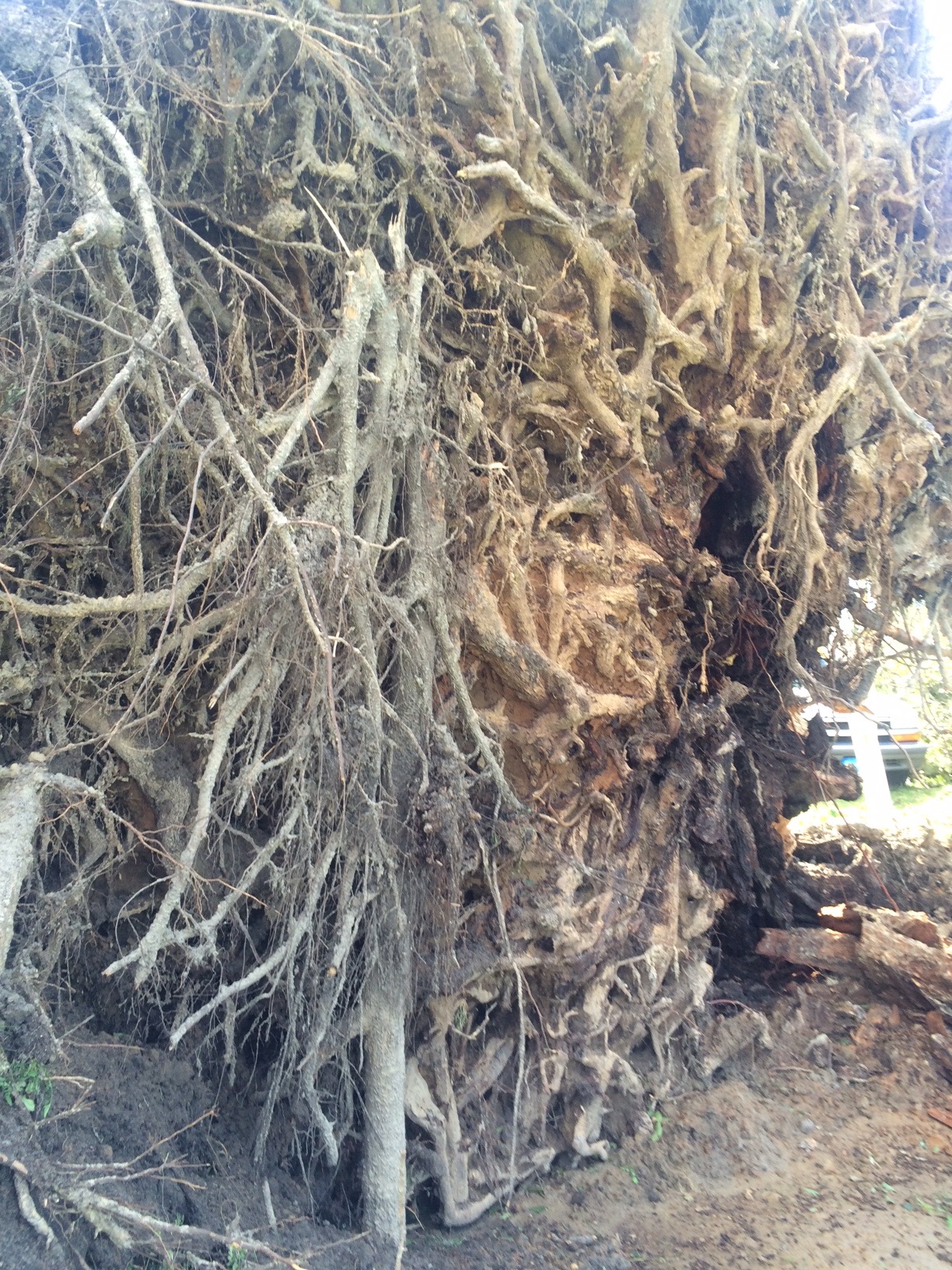 As coincidence would have it, the storm came along just as my coauthors and I got word of acceptance of an article on the domination of hillslope denudation processes by tree uprooting (in a much different environment in the Carpathain mountains). The preliminary version is available via http://authors.elsevier.com/sd/article/S0169555X16305001. When the final version is published, I'll let you know with one of my shameless self-promotion posts.