Imagine exploring and mapping a newly discovered cave opening. At this point, there is only one set of questions--how long, deep, tall, wide, etc. is the passage, and where does it go? But as you begin to map it, more often than not, other passages and fissures will be discovered (and many of them will lead to others, and so on). This opens up a whole new set of questions. Some of the passages can be mapped, assuming someone can get the time and resources. Others can't be no matter how skilled the spelunker; they are too small. But even these can possibly be explored later, perhaps with remote control or AI tiny robots or probes; or with imaging techniques that can see through rock.

This is a pretty good metaphor, I think, for research in general. The more you learn, the more you discover you don't know, and more potential pathways for research appear--some possible now, some awaiting new techniques.

I was thinking about that recently, assessing the impacts of Hurricane/Tropical Storm Matthew on a forest in North Carolina (see this previous post). Despite all the work that I and (mostly) others have done on the geomorphological, pedological, hydrological, and ecological effects of strong wind events in forests (due to, e.g., tree uprooting and breakage), every time I look it seems more questions are raised.

What follows are basically observations, questions, and suggestions, with limited answers or insight. All photos are from the Croatan National Forest in Craven County, N.C.

I already talked about wind-driven uprooting vs. breakage, but in my further forays into the forest I noticed more partially uprooted trees. In the cases I observed, this happened because the tipped-over trunk is blocked by other trees. Thus, you'd think denser vegetation and closer tree spacing would favor this phenomenon. However, in some cases uprooting of one tree can cause a chain reaction, knocking others over (either directly, or in concert with the wind). I observed this also, but didn't get any really good pictures. 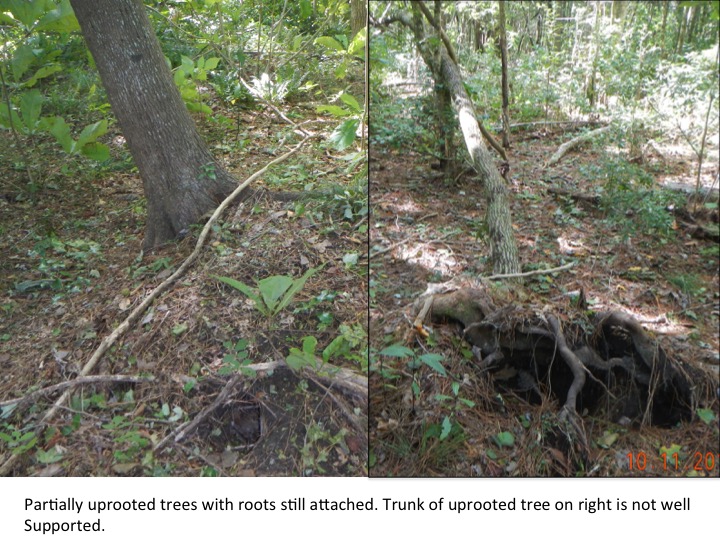 Even among the partial uproots, we see variations in the extent of root exposure & breakage on the uptilted side--compare the photos below to those above. 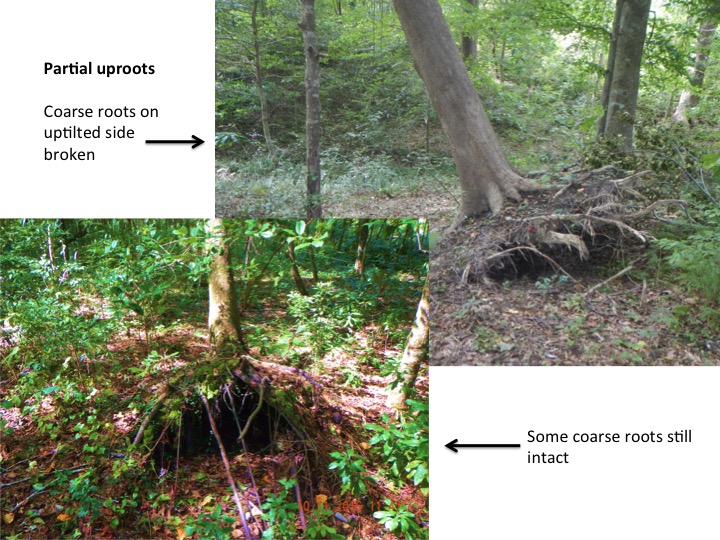 At least some of the trees simply continued growing in their tilted position, reorienting their trunks, and/or sending up new vertical branches from the tilted trunk. 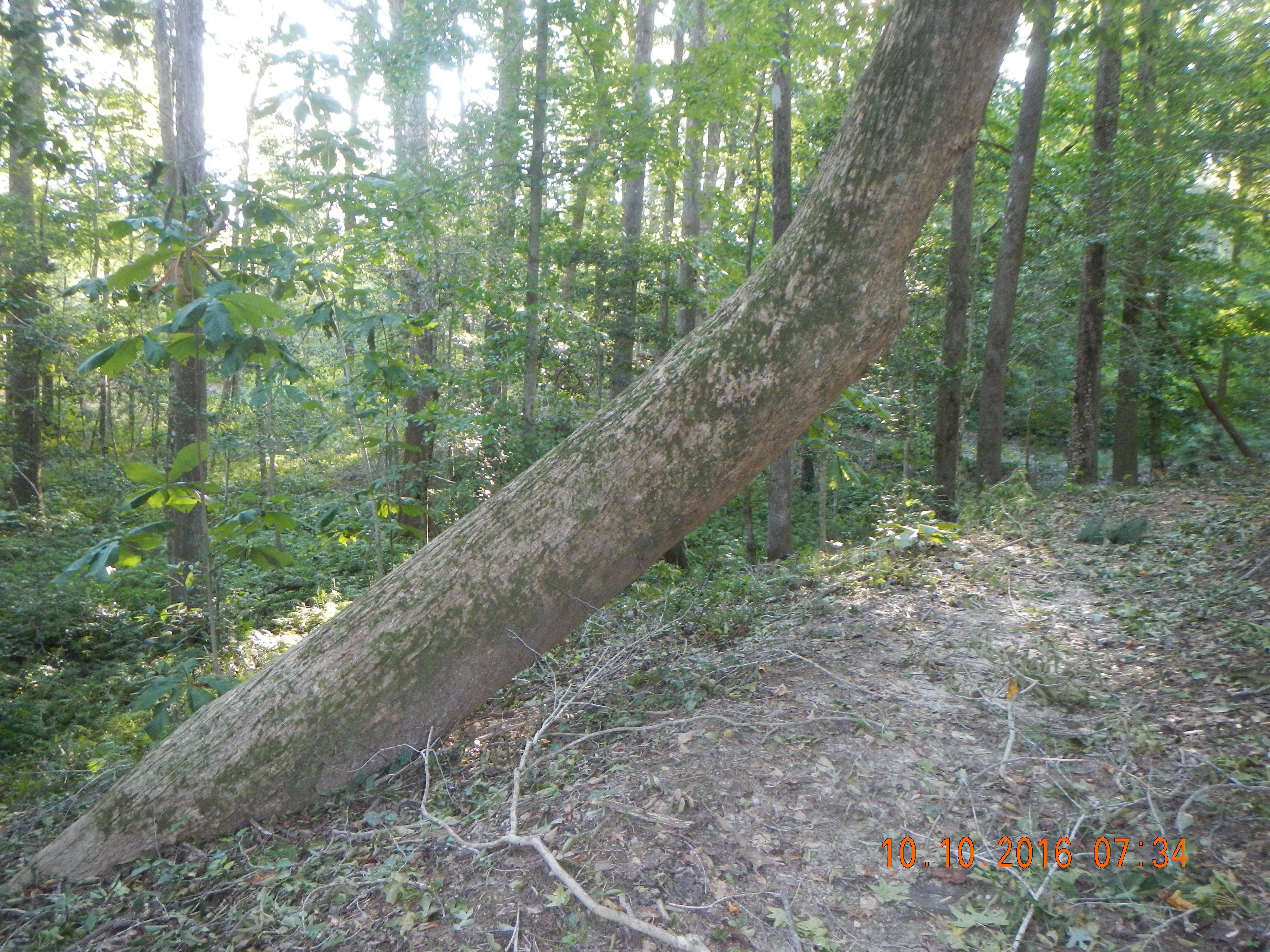 Speaking of tree spacing, check out the picnic area below, where there was no uprooting or breakage at all, despite the greatest exposure to winds off the Neuse River estuary of any site examined. Possible reasons--removal of unhealthy or dead trees by the forest service, and better drainage than many of the other sites I looked at. 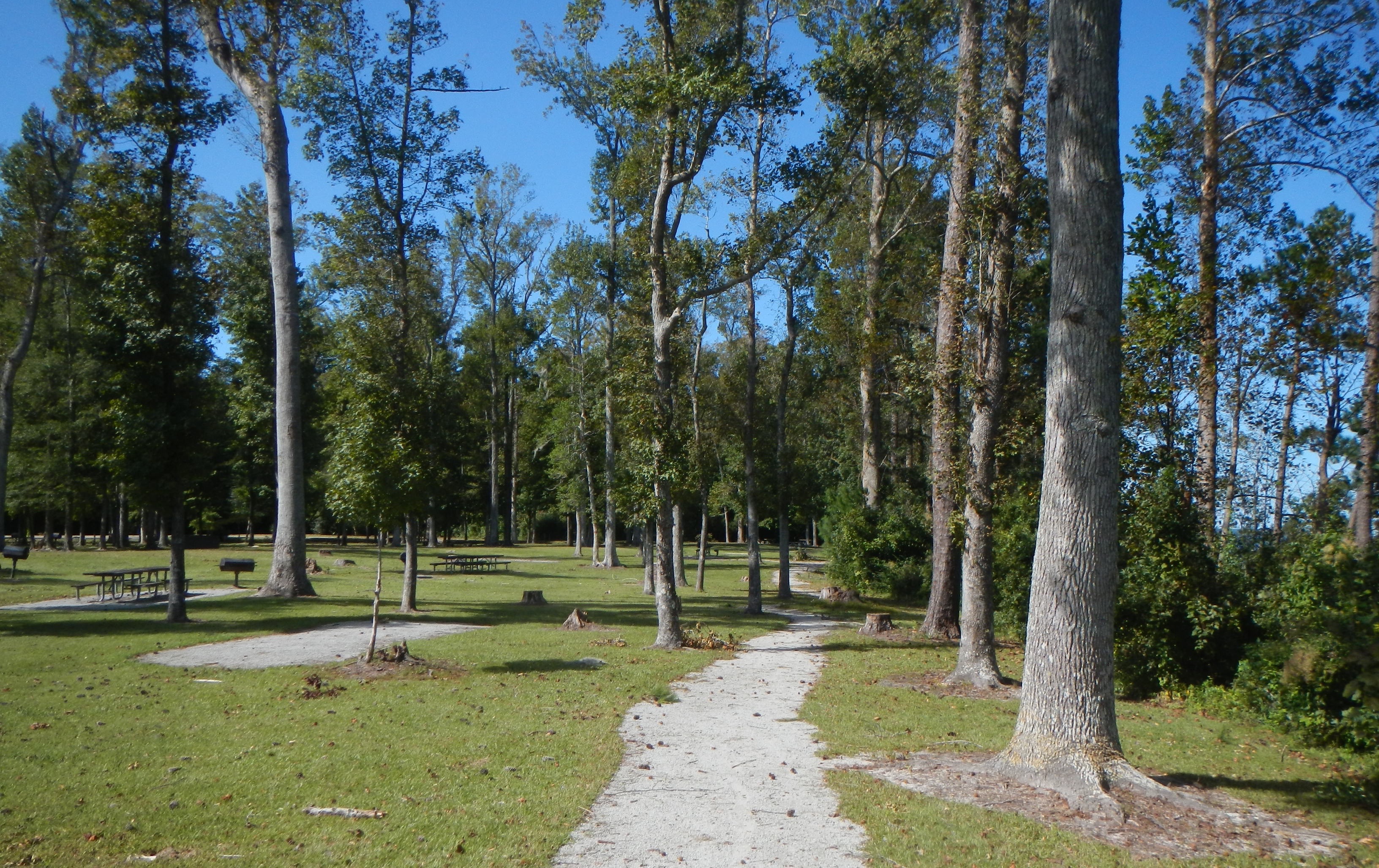 Breakage vs. uprooting also depends on the type of tree and its root system:

For dead trees, or living trees with unhealthy root systems, shallow uprooting may occur--that is, the rootwad will consist of just a thin layer of soil. This results in a much smaller microtopographic feature (smaller mound, shallower pit) than uprooting of a live tree with healthy roots. 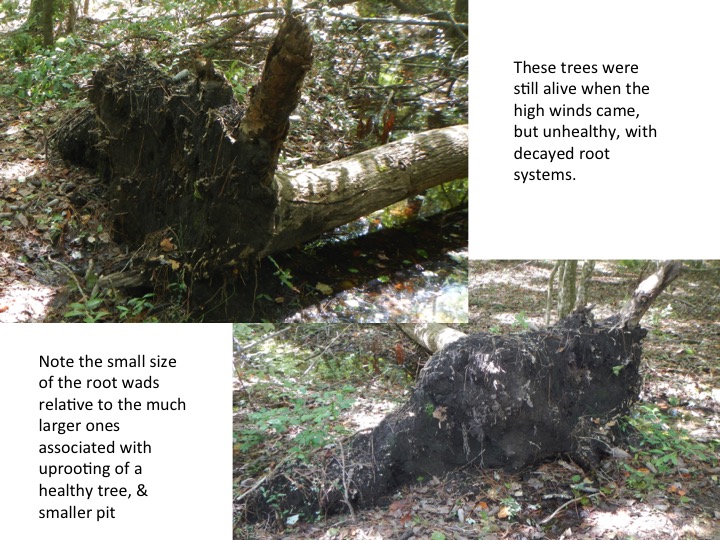 Also observed some trunkwash, a phenomenon my colleagues and I recently recognized in this article. The net effect of trunks and branches lying on the ground seems to be bioprotection and upslope sediment retention, but sometimes the funneling of runoff results in some slopewash on the downslope side. 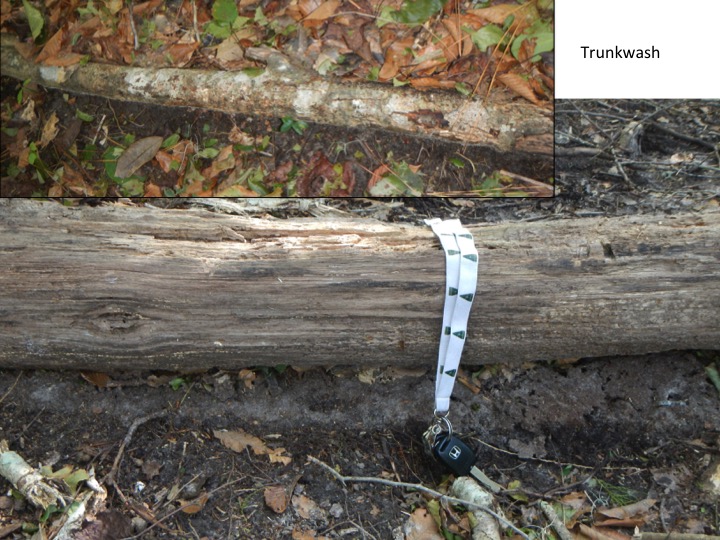 Since 2004, I've been harping on the idea that trees preferentially reoccupy the same microsites, with implications for weathering and soil formation. Those who've spent a lot of time in the forest have noted plenty of stump-sprouting (new shoots and ultimately in some cases trunks) from stumps. In some cases, however, a different species can sprout from a stump, or trees of two different types may essentially share a microsite--this may happen when animals (e.g., squirrels) bury a nut or seed beneath roots of living trees. 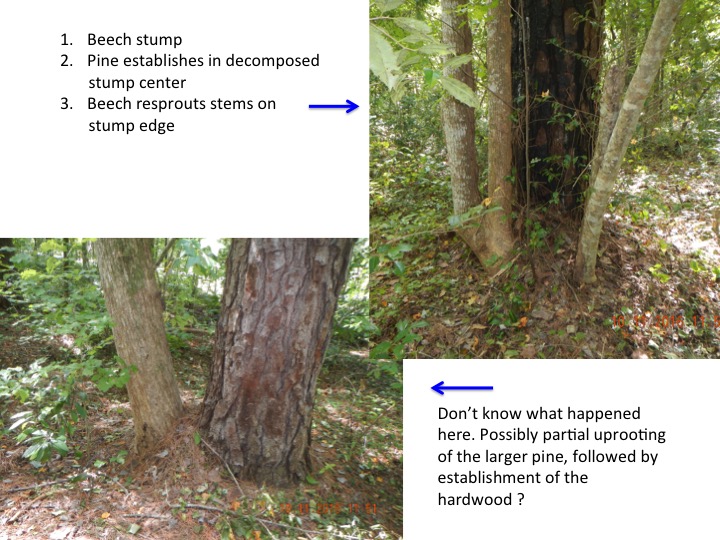 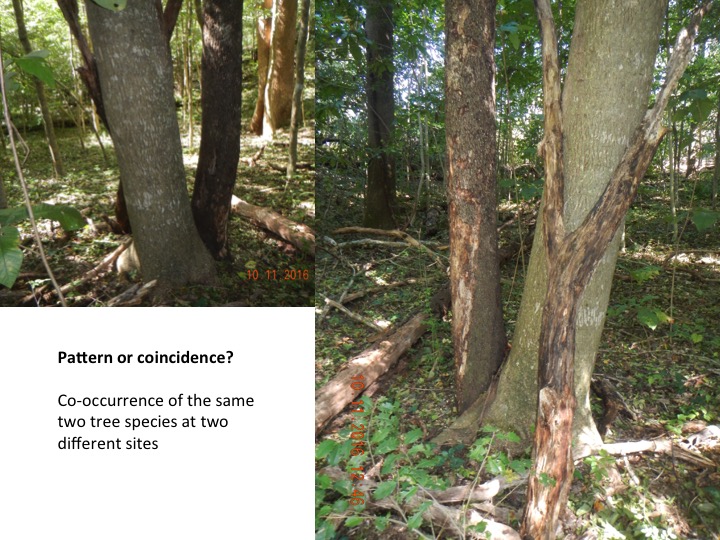 But what determines whether the rotted stumps host new trees before a depression can be formed, vs. forming a stumphole, like the one below? And we still don't know much about the extent to which (or circumstances under which) stumpholes infill via slumping of the surrounding soil, deposition of transported sediment, or organic litter. 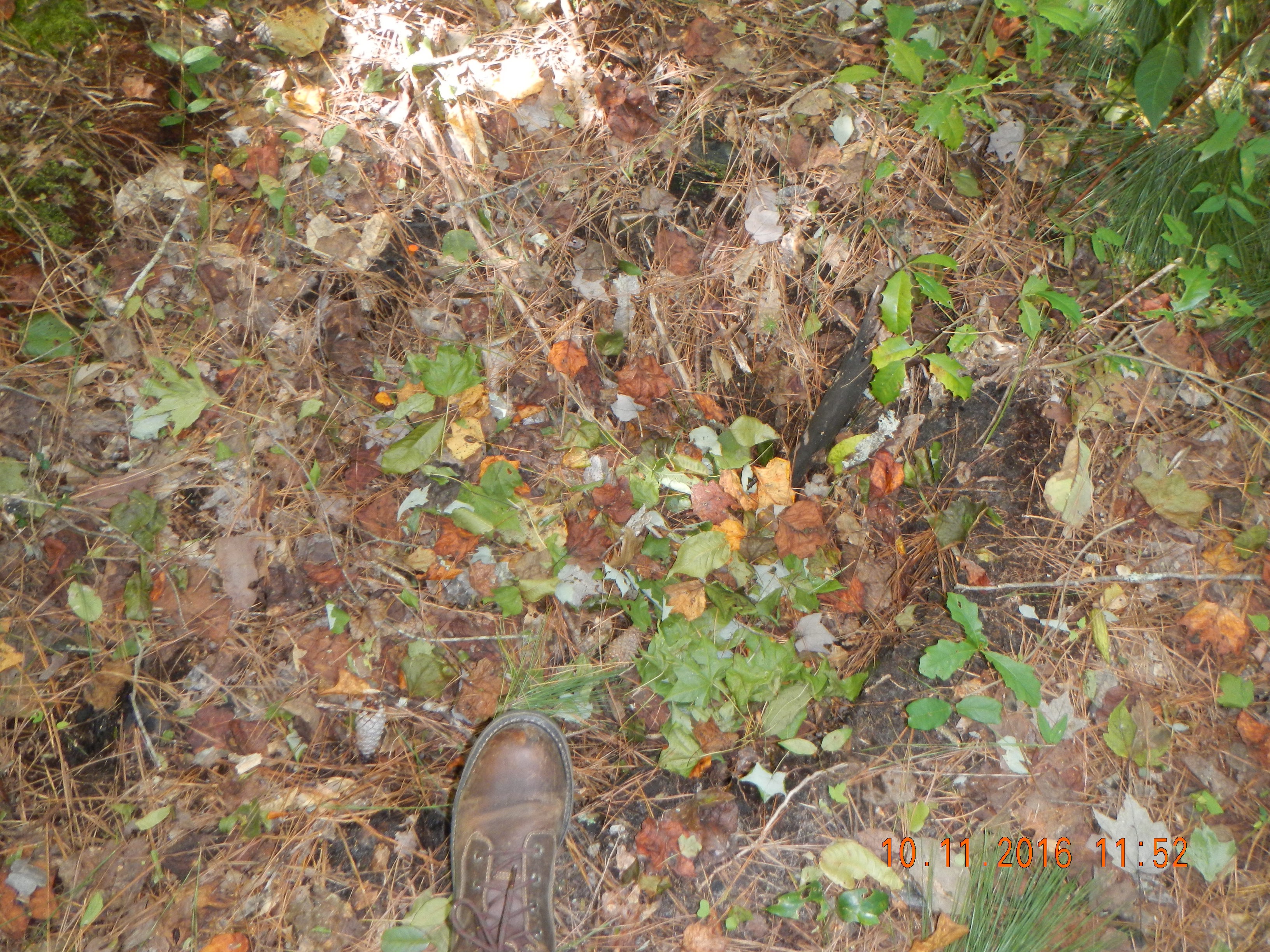 Finally, it used to be thought that there was little or no water erosion in the flat coastal plain. However, that was disproven for good back in the 1990s (see, e.g., this and this). At least some of the water's gotta move, and when it does it takes some sediment with it, as the rill below shows. 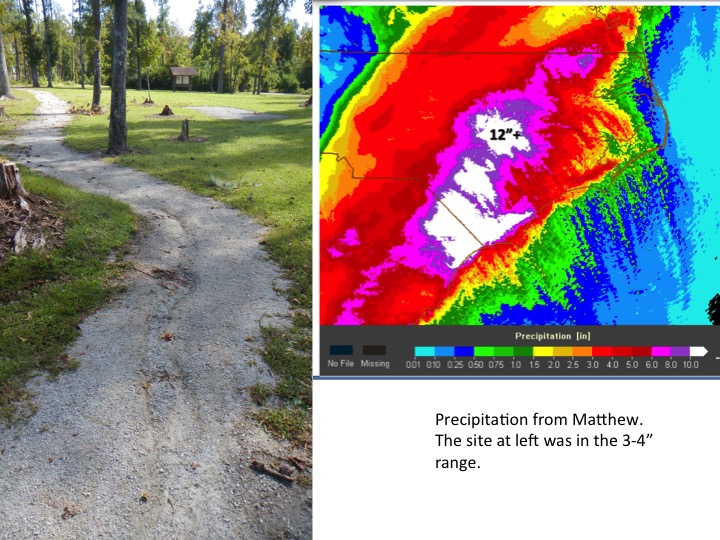