Generalized Darwinism holds, in essence, that the principles of variation, selection, and retention (preservation) and replication that are the cornerstone of Darwinian biological evolution are applicable to development and evolution of (to exaggerate only slightly) damn near anything. This perspective, most actively debated in evolutionary economics, is detectable (though sometimes without the specific label) in many science and social science fields.

Generalized Darwinism has many critics, but most critiques I've seen fall into two categories (to simplify and generalize wildly): (1) a lack of fidelity to biological evolution; or (2) an inability to solve every problem in evolutionary economics, system theory, etc.  Those criticisms are accurate, but not valid (in my estimation), as the "generalized" clearly implies a move beyond biological evolution, and no conceptual or analytical framework is ever the answer to everything, even in a relatively small subdiscipline.

Like others, rather than invoke Darwin's name and all the associated baggage, I prefer to point out the importance of selection (of which Darwinian natural selection is one example) in a variety of environmental systems (see these previous posts: A, B, C). The logic I propound (which is hardly unique or original to me) is that (1) variations occur; (2) some variations are more durable, stable, efficient, or otherwise favorable; and (3) those are more likely than others to be preserved, enhanced, and replicated (i.e, selected).  Pretty consistent with GD, in other words. So I have no quarrel with GD in terms of its axioms and worldview, though I hardly endorse (or even know about) all its claims or applications.

The problem I have is when selection is interpreted as a goal function or a purported law of nature rather than an emergent property. The fact that some phenomenon recurs repeatedly, and can be interpreted in terms of selection, does not mean that nature has adopted this outcome as a goal. Does nature prefer sandstone ridgetops? Maybe, but a simpler explanation is that sandstones are more weathering resistant and physically durable than the other sedimentary rocks they often occur with. Thus they are preferentially preserved (selected) as denudation proceeds, and thus plateaus and tablelands in sedimentary rocks around the world often have sandstone ridgetops. 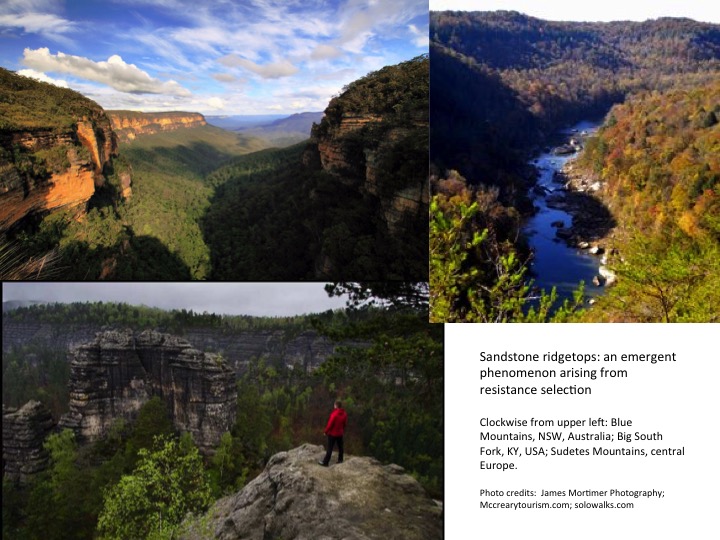 My first published arguments along these lines--in the context of ecosystem and biosphere evolution--are here.  I subsequently made similar arguments for geomorphic and hydrological systems.

Because variations occur and selection happens in all sorts of phenomena, temptation is strong to propose natural laws or goal functions. For example, this paper expresses it as the "persistence principle," which is stated as "nature seeks persistent forms."  Mostly the authors are not wrong, but the "nature seeking" part is troublesome. A more accurate, if self-evident, way to put it, is "persistent forms persist." Thus they are more common and last longer than other forms. They are selected for, probabilistically (as almost all selection occurs), and their common occurrence is an emergent property of this selection, not a goal function of Mother Nature.

The emergent approach is simpler (and thus preferred by Occam's Razor) than trying to ascertain and explain why rivers, atmospheric energy transfers, biogeochemical cycles, or chemical reactions (for instance), should seek or prefer anything.