Last year, my fluvial geomorphology class investigated the origin of an unusual overhanging bedrock stream bank on Shawnee Run, Kentucky. Because on our first field visit the cliff above was festooned with large (up to 2 m long) icicles, we named it Icicle Bend. In the course of our fieldwork, we discovered what we eventually determined to be higher level paleovalley of Shawnee Run nearby. Stream channel changes by cutoffs, avulsions, and capture happen all the time. But, invariably, the new, "winning" channel represents a more efficient (i.e., more direct and steeper) path. In this case, however, the opposite appeared to have happened--a shorter, steeper path represented by the paleovalley was abandoned during general downcutting of the stream for the modern path via Icicle Bend. PhD student Tasnuba Jerin and I decided to further investigate this anomaly.

To make a long story short, we found that the abandonment of the old channel was associated with capture of streamflow by a subsurface karst conduit, which was later uncovered. Beyond being an interesting field problem, the case indicates (or reinforces) that the laws governing flow paths operate on a very local scale--thus achieving maximum efficiency at a given point (in this case, where the conduit opened in the stream channel) may not lead to a more efficient path at the broader scale. 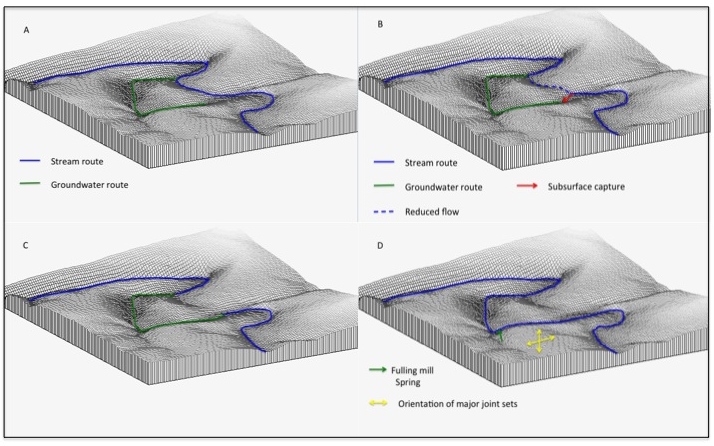 Inferred evolution of the Icicle Bend area, with the modern topography as a background, adapted from Figure 9 of the article. A is pre-capture, with a presumed groundwater flow following general trends of major joints. In B, flow is diverted into the subsurface route, with the surface route drying up. At stage C, the former surface route has been abandoned, with groundwater flow connecting the upstream and downstream portions of Shawnee Run. Subsequent exhumation or collapse of the karst conduits produces the contemporary situation (D).

The article based on this work was recently published in Geomorphology. The abstract is below:

Development of fluvial systems is often described and modeled in terms of principles related to maxima, minima, or optima of various hydraulic or energy parameters that can generally be encompassed by a principle of efficiency selection (more efficient flow routes tend to be preferentially selected and enhanced). However, efficiency selection is highly localized, and the cumulative effects of these local events may or may not produce more efficient pathways at a broader scale. This is illustrated by the case of Icicle Bend on Shawnee Run, a limestone bedrock stream in central Kentucky. Field evidence indicates that a paleochannel was abandoned during downcutting of the stream, and the relocation was analyzed using a flow partitioning model. The bend represents abandonment of a steeper, straighter, more efficient channel at the reach scale in favor of a longer, currently less steep and less efficient flow path. This apparently occurred due to capture of Shawnee Run flow by a subsurface karst flow path that was subsequently exhumed. The development of Icicle Bend illustrates the local nature of efficiency selection, and the role of historical contingency in geomorphic evolution.