HOW I STOPPED WORRYING AND LEARNED TO LOVE CONTINGENCY

Evolution (I use the word here in its most general sense of long term historical development) of Earth surface systems is historically contingent and path dependent. This seems to be true of evolution of anything, but I will stick here to my supposed areas of expertise. The state of an Earth surface system (ESS; a landscape, ecosystem, etc.) is a function of generally applicable laws that ultimately determine the range of possibilities, geographically specific place factors (environmental constraints and opportunities), and history. While laws are general, if not universal, and apply to every ESS of a given type (e.g., stream channel, cave, mangrove swamp, soil profile, etc.), the place factors define the template in which those laws operate.

And then there is history.

History includes the initial conditions of ESS development, chains or sequences of events, environmental change, and disturbances of many types. Historical contingency occurs in the form of inheritance (persistence of features or effects from the past), dynamical instability (impacts of changes or disturbances that are disproportionately large and/or long-lasting compared to the disturbance itself), and conditionality. Conditionalities are different trajectories evolution may take according to the occurrence or not of certain events or effects. I have previously called these "Bailey Effects," based on the George Bailey character in the book and movie "It's a Wonderful Life."  The metaphor is explained here, and I note that Stephen J. Gould has used that same story as a metaphor for role of historical contingency in biological evolution.

The patch of land where I sit now, for instance, in its current state is contingent on any number of past climate changes, sea level oscillations, geological events and episodes, biogeographic dispersals, and biological speciations or extinctions (thus, at longer time scales, even the place or geographical factors have elements of historical contingency). On shorter time scales, it depends on tropical storm climatology; the magnitude, timing, severity, and specific tracking of specific tropical cyclones; initial conditions at the outset of these cyclones; and other events and their specifics such as floods, tornadoes, severe rainstorms, and extratropical cyclones. It depends on whether or not lightning strikes or a cigarette is tossed on the ground, whether either ignites a fire, the fuel conditions on the ground and meteorological conditions when a fire ignites, and in the past couple of centuries, whether humans decided to put it out or let it burn. The state of this ESS depends on land ownership and management, and an uncountable number of decisions and happenstances.  Due to teleconnections, the historical contingencies are not even confined to things that happen (or not) here. Climate and sea-level effects of changes in Antarctic ice, sea surface temperatures in the tropical Pacific, and timber prices in India or Brazil may all leave their mark.

And so it is wherever you are right now, and any other place. The details are always different, but the phenomenon of historical contingency is always the same.

So here's what I wrestle with as a geoscientist attempting to understand and interpret ESS evolution: If you look back at a known or hypothesized time zero starting point in terms of what could have happened, or what would happen if you could rewind the clock and start over, there are multiple possible pathways and outcomes at any given point in time. If you think about it in sufficient detail, there may exist infinite possibilities. Note that infinite does not mean that anything could happen--there are an infinite number of even integers for example, but if you choose one at random if cannot be odd or non-integer.

If you represented this as a mathematical directed graph with system states as the nodes and possible changes through time as the links, even if there were just two possibilities at each juncture or point of potential change, there would be 2q possible states after q episodes of change (storms, lightning strikes, land use decisions, etc.).

However, if you look at the state of an ESS at any given time, the chain of events and state changes that actually led to that would be a linear sequential directed graph--that is, A led to B, B to C, and so on. From this perspective, the observed ESS is a singular outcome of a particular chain of events (constrained by laws and place factors) that could not have turned out any other way. Even if you acknowledge that the hypothetical resetting of the clock or rewinding of the tape would not produce the same result, the fact is that history is irreversible. 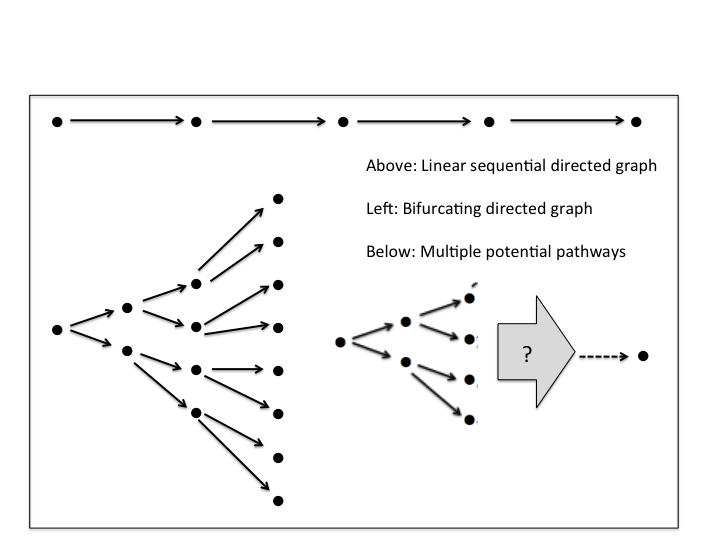 ESS evolutionary sequences. Top: what did happen. Left: what could or could have happened. Bottom right: Typical interpretive situation, with uncertainty about how an observed state did happen, and multiple possibilities.

Looking ahead, multiple future trajectories and outcomes are possible. Those can be constrained based on law and place factors, but the possibilities become larger and essentially limitless further into the future. Yet, of course, only one trajectory will occur, with each change opening up new possibilities but foreclosing other possible pathways.

So what I'm looking for is some sort of mathematical or logical framework or language that can handle these ideas on the one hand, and concrete evidence of actual trajectories on the other--histories, basically. I'm hoping the former can provide a metanarrative to encompass the individual case study stories of the latter.

But I haven't gotten very far. My formal mathematical training was limited to what I had to have to get through college and grad school. I am an enthusiastic, but not particularly talented, autodidact in this regard, but my progress is slow and clumsy. On the geoscience side, I was trained on the process mechanics side of the discipline at time when historical approaches were not only largely ignored, but actively disdained by many.

Those are my excuses for the minimal progress. But in future posts I'll fill you in on what I've been looking at.

Next: Nonlinear dynamics and chaos