HOW I STOPPED WORRYING AND LEARNED TO LOVE CONTINGENCY V: CANALIZATION

In genetics, canalization is the ability of a genotype to produce the same phenotype regardless of the environmental setting. In an evolutionary context, canalization (often spelled canalisation) is a manifestation of historical contingency. Once a successful genotype arises it tends to persist, and other evolutionary pathways are closed off. The evolutionary trajectory is in some senses confined to a "channel," the metaphor that produced the term canalization. The term, originally due to biologist C.H. Waddington, has since been used by others in a broader sense to refer to historical development phenomena whereby once a particular path is "chosen" there is an element of lock-in (the quotes are not only because Earth surface systems (ESS) lack intentionality, but also because the selection may be due to random chance or be highly sensitive to minuscule variations). 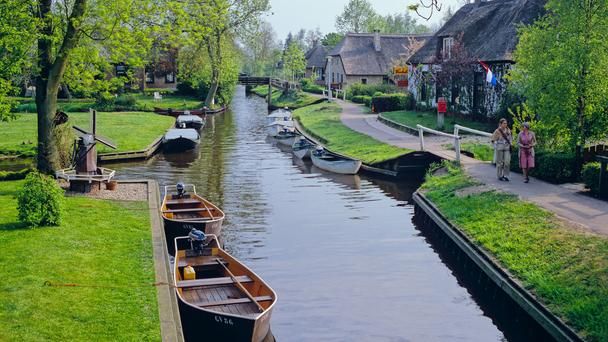 Canalization also has a more literal meaning, of course, associated with the construction of canals and channelization of rivers. This one is in the Netherlands.

Positive feedbacks may play an important role. To use an example where the channelization metaphor is literally applicable, whether a channel forms here or a few meters away may be influenced (via dynamical instability) by such tiny variations as to be pseudorandom. Once formed, however, the new channel is a more efficient flow path, and those flows help maintain it, and scour may enlarge it. The formation of the channel was not preordained or deterministically predictable with respect to its precise location, but once established it closes off some previously possible channel locations and strongly influences down-gradient channel locations.

Irreversibility can also play a role. Once a portion of a hillslope fails, for example, the slumped material is not going to return to its original location. The mass movement, and the associated rearrangement of slope morphology influences future slope processes, making some pathways and outcomes more, and others less, likely. That is, slope development is to some extent canalized.

Can the effects of canalization be treated analytically? In mathematical or statistical principle, yes--but I have figured no way to do it in practice.

From the perspective of predicting future evolution, or identifying possible alternative developmental pathways from a (known or hypothetical) past starting point, multiple possibilities at each stage or iteration must be considered. Speciation, for instance, depends on random genetic variability and is non-deterministic. The direction of hydrological flow paths depends on the "choice" of alternative routes, which could be deterministically predicted only with essentially perfect, detailed knowledge of both the flux and the environment. For the simplest case of two possibilities at each iteration, there are therefore 2^q possible outcomes at the qth stage. Therefore, for example, a water flow path from a single location could occupy any of 32 different locations after q = 5 cases of a binary selection of alternative flow paths. This can be represented as a directed graph of the binary tree type. Assuming equal probability at each bifurcation, the probability of any single particular outcome at q iterations is 1/2^q = 0.5^q.

Assuming at least two possibilities at each evolutionary or developmental crossroads, this suggests that at each stage or iteration of ESS evolution, the number of possibilities that existed before that stage is reduced by at least half.