(Feb. 6, 2014 ) — Catherine Opie, a documentary photographer known for stretching the boundaries, will continue the Robert C. May Photography Endowment Lecture Series with a lecture at 4 p.m. Friday, Feb. 7, in Worsham Theater at the University of Kentucky Student Center. In conjunction with her visit, an exhibition of Opie's work is on display Feb. 7 through March 9, at the Art Museum at UK. The lecture and the exhibition are free and open to the public.

Catherine Opie photographs complex bodies of work. She usually focuses on sexual, communal and cultural notions of the world. Her pictures 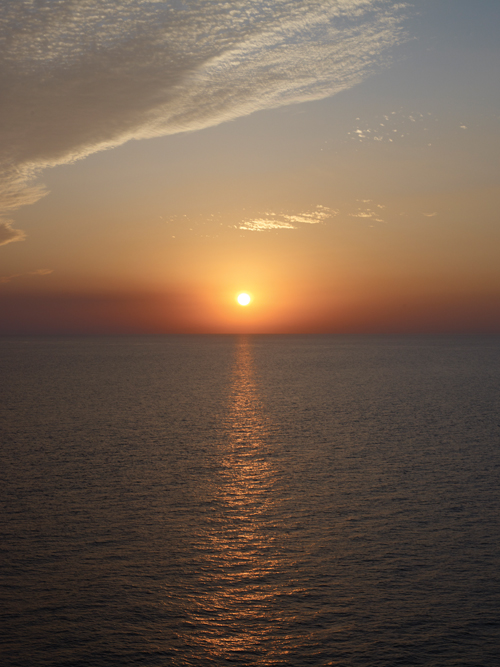 are known for showcasing different ideas of masculinity and femininity of transgender, cross-dressers and members of the gay and lesbian community of Los Angeles.

On the other end of the spectrum, Opie is also recognized for powerful pictures of seascapes that make the viewer feel like he or she is in the water. Large seascapes of this type from the series "12 Miles to the Horizon" are on display at the Art Museum at UK. Both meditative and visually stunning, they evoke color field painting as well as notions of the sublime in painting, in which nature provides a spectacle that goes beyond mere beauty to provide a spiritual experience. At the same time, Opie's work plays with the notion of sunrise and sunset as photographic clichés.

Opie's first solo project was showcased in New York's 494 Gallery in the year 1991. Since that date, she has also been showcased in multiple museums nationally and internationally, including the Museum of Contemporary Art in Los Angeles, The Photographers' Gallery in London, and the Guggenheim Museum in New York, just to name a few. Opie has also had work shown in group exhibitions including "All But the Obvious" at the Los Angeles Contemporary Exhibitions and the "Whitney Biennial" in New York at the Whitney Museum of American Art. Opie's Whitney Biennial collection was the first time she received vast recognition.

The artist first studied photography at the San Francisco Art Institute. Opie graduated with a degree in photography in 1985. After graduation, she enrolled in the MFA program at the California Institute of the Arts. Upon finishing school, Opie worked as a lab technician until 1994. She now lives and works in Los Angeles.

The 2013-2014 May Lecture Series explores appropriation, portraiture, landscapes and socially concerned photography. The series is made possible through the Robert C. May Photography Endowment, a museum fund established in 1994 for the support of acquisitions and programs relating to photography. Other photographers coming to town as part of the series this year include Eugene Richards.

The mission of the Art Museum at UK, part of the UK College of Fine Arts, is to promote the understanding and appreciation of art to enhance the quality of life for the people of Kentucky through collecting, exhibiting, preserving and interpreting outstanding works of visual art from all cultures. Home to a collection of more than 4,500 objects, including American and European paintings, drawings, photographs, prints and sculpture, the Art Museum at UK presents both special exhibitions and shows of work from its permanent collection.