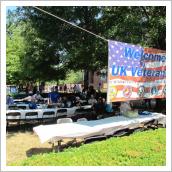 The University of Kentucky has been named a 2013 Military Friendly School by Victory Media, publisher of G.I. Jobs magazine. This is the fourth consecutive year that UK has earned this recognition.

"We are very proud to once again be designated a Military Friendly School," said Anthony Dotson, coordinator of the UK Veterans Resource Center. "The University of Kentucky has made a commitment to serving those who have served our country, and this designation reflects how we live up to that commitment."

The 2013 Military Friendly Schools list honors the top 15 percent of colleges, universities and trade schools in the country that are doing the most to embrace America’s military service members, veterans, and spouses as students and ensure their success on campus.

The Military Friendly Schools website, www.militaryfriendlyschools.com, features the list, interactive tools and search functionality to help military students find the best school to suit their unique needs and preferences. The 1,739 colleges, universities and trade schools on this year’s list exhibit "leading practices in the recruitment and retention of students with military experience."

UK was recognized, along with other schools, for its "world-class programs and policies for student support on campus," academic accreditation, credit policies, flexibility, and other services to those who served.

"We are proud to have among our students more than 500 men and women who have served in the U.S. Armed Forces," said UK President Eli Capilouto. "We are honored to receive recognition as a Military Friendly Campus. But the most important recognition we receive comes from our student veterans themselves. Our success can be measured in their achievements, both academically and in their lives beyond graduation."

Now in its fourth year, the 2013 list of Military Friendly Schools was compiled through extensive research and a data-driven survey of more than 12,000 VA-approved schools nationwide. The survey results that comprise the 2013 list were independently tested by Ernst & Young LLP based upon the weightings and methodology established by Victory Media.

Each year schools taking the survey are held to a higher standard than the previous year via improved methodology, criteria and weightings developed with the assistance of an Academic Advisory Board (AAB) consisting of educators from schools across the country.  A full list of board members can be found at http://militaryfriendlyschools.com/board.

Last November, UK was also recognized as one of the top 10 "Best for Vets" colleges by Military Times' Edge magazine. UK ranked No. 7 nationwide in a survey that places emphasis on academic accreditation, central veterans' offices and staff knowledgeable on veterans' issues