400 Years Since Slavery Began: 'History is Full of Beginnings, the Present can be one too' 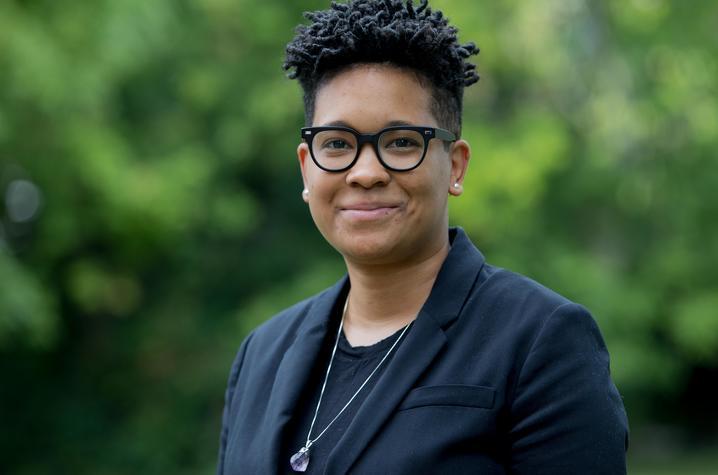 Today we reflect on a grim chapter in our nation's history — the beginning of a 400-year story filled with tragedy, inequality, resilience and survival.

On Aug. 20, 1619, a ship carrying 20 enslaved Africans arrived in Jamestown, Virginia, changing the course of American history. These men and women were among more than 12 million other captives to be sold to colonists in what would become the United States.

The transatlantic slave trade — which reduced Africans to commodities — would endure for centuries and ultimately shape our country and the state of Kentucky.

To this day, one of the darkest periods of our nation's past continues to cast a shadow.

How does the legacy of slavery still resonate with Kentuckians, and how do we — as a state — heal from history? We asked Vanessa Holden, an assistant professor of historyand African American and Africana studies at the University of Kentucky, to share her expertise and thoughts in the Q&A below.

UKNow: On this anniversary, why should we acknowledge slavery’s deep roots and recognize the significant role that captive and free African Americans have played in building the United States of today?

Holden: The anniversary of the arrival of enslaved people in Virginia, a British North American colony, is one of many starting points in the history of Atlantic slavery. Back in a time when colonial powers were carefully developing systems of slavery to make new commodities like sugar and tobacco profitable, enslaved people were at the center and not the margins of the story. Over time, English colonists and later Americans would build and maintain a legal and social system of their own that enslaved people of African descent for life, ensured that their children would be enslaved, and made incredible profits off of their labor. Virginia’s success as a colony, important role in the American Revolution and continued political power in the early American republic are all integral to the story of the U.S., and enslaved people made it all possible.

UKNow: Slavery began in 1619, but Kentucky wasn't founded until 1792. That being said, how did the slave trade shape the identity of our state?

Holden: Perhaps Kentucky did not become a state until 1792, but what we call Kentucky now existed long before that date, as did slavery. From ancient times, systems of slavery provided labor to powerful people groups. What changed in the Atlantic World of the 16th and 17th centuries? European powers invented racialized chattel slavery: slavery based on race that made people (and not their labor) property. This took time to develop and was different in contexts controlled by different world powers. For the United States, 1619 remains significant because colonial Virginians began the process of making enslaved Africans their primary source of labor.

Kentucky, of course, has its own longer history. Native Americans had long lived in the region. Settlers of European descent coveted the region throughout the colonial period. Colonists, soon to be Americans, had already begun the process of incursion into the region by the time of the American Revolution. And it was important to those intent on claiming Kentucky for themselves that they be allowed to bring enslaved property with them if they so wished. The long process of defining slavery and profiting from it continued in the incursion into Kentucky.

Kentucky became an important node of the internal slave trade after the U.S. closed the Atlantic slave trade in 1808. Planters needed more slave labor to make cotton plantations profitable in the Deep South. Lexington, for example, was home to one of the most important slave markets in the country that daily sold enslaved people to states in the Deep South. Some individuals opted out of participating in slavery or simply could never afford to own even one enslaved person. However, Kentucky profited greatly from its role in the internal trade. As the antebellum period began, enslaved people were often more valuable than the land they worked in the upper South. Families banked on the “increase” (children) of their enslaved population, selling enslaved men, women, and children to finance their lives or get their own children started. Kentuckians made money on slave sales, hired out enslaved people and collected their wages for themselves, and used enslaved people like financial products to bolster their own prospects.

UKNow: Were slaves a large portion of Kentucky’s growing population and, thus, how are their experiences a significant part of Kentucky’s state history?

Holden: Black Kentuckians made incredible contributions to American History and Kentucky History, from Appalachia to the Mississippi River. I encourage everyone to look at my colleagues’ excellent work on the Notable Kentucky African American’s Database. I’d also encourage those interested one of Kentucky’s iconic industries, the horse industry, to visit the Kentucky Horse Park to view the exhibit, "Black Horsemen of the Kentucky Turf" at the International Museum of the Horse. There, other UK colleagues, local historians, and curators worked together to tell the story of how African Americans shaped the region and horse culture.

UKNow: Four hundred years have passed, but why does the legacy of slavery still resonate with Kentuckians today?

Holden: While Kentucky did not secede from the Union during the American Civil War, it held on to slavery. This was true symbolically even when it wasn’t true legally anymore. Kentucky didn’t ratify the 13th amendment until 1976, for example. After the war, Kentucky, like the rest of the nation, held on to racial hierarchy. While slavery is a part of the story of contemporary issues with race, what happened after slavery was abolished is also part of the story. We’re still living the story of “after.” The good news is that we get to shape our chapter of the story by learning about the past, being accountable in the present, and building for the future.

UKNow: Today, we take this moment to face one of the most painful parts of our national history. How can we — as a country and a state — continue to heal from our past?

Holden: Acknowledgment is an important step towards facing challenges in the present. For some, this might seem like an overwhelming charge: how can we even begin to reconcile something so painful? Why focus on something so hard? Why not “move on”?

It is hard to move on when you don’t know where you’ve been or where you’re at now.

Slavery is everywhere. It’s in our architecture, our city plans and layouts, our place names, and our cultural institutions like our music, bourbon, and horses. Enslaved people’s labor, lives, and experiences shaped our state and our nation. 1619 is one beginning. But Kentucky has many other beginnings of its own. History is full of beginnings and the present can be one too.

The University of Kentucky is increasingly the first choice for students, faculty and staff to pursue their passions and their professional goals. In the last two years, Forbes has named UK among the best employers for diversity and INSIGHT into Diversity recognized us as a Diversity Champion two years running. UK is ranked among the top 30 campuses in the nation for LGBTQ* inclusion and safety. The Chronicle of Higher Education judged us a “Great College to Work for,”  and UK is among only 22 universities in the country on Forbes' list of "America's Best Employers."  We are ranked among the top 10 percent of public institutions for research expenditures — a tangible symbol of our breadth and depth as a university focused on discovery that changes lives and communities. And our patients know and appreciate the fact that UK HealthCare has been named the state’s top hospital for three straight years. Accolades and honors are great. But they are more important for what they represent: the idea that creating a community of belonging and commitment to excellence is how we honor our mission to be not simply the University of Kentucky, but the University for Kentucky.