Elsevier has announced a May 1 predicted shipping date for my forthcoming book, Landscape Evolution, cheerfully assuming that someone will want it. Below is the mockup of the back and front covers, complete with descriptive blurb and cover art by Petr Mores. You can pre-order at https://www.elsevier.com/books/landscape-evolution/phillips/978-0-12-821725-2. 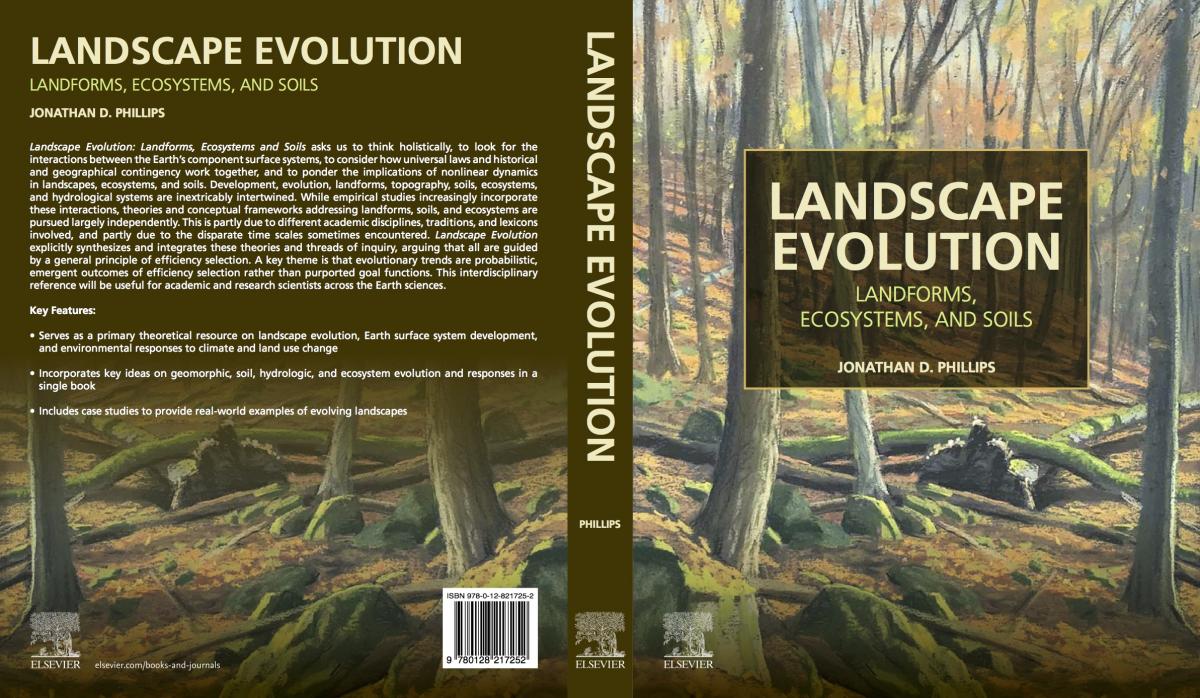 Thanks for the (Soil) Memories

In my own work on pedology, soil geography, and soil geomorphology, there are at least three overlapping concepts of soil memory (or pedological memory) that at least generally, if clumsily, parallel the pedological literature as a whole.

One is based on the fundamental idea of soils as products of the environment, reflecting the combined, interacting influences of geological (or other) parent material, hydrological and geomorphological processes, climate, biota, all changing over time, and affecting each other and affected by the soil itself.  This is the factorial or state factor model of soils going back to Dokuchaev and Jenny, and the conceptual basis of soil geography, surveying and mapping. Inverting the logic—soils as evidence of the environment rather than the environment as an explainer of soils—is the basis of paleopedology and paleoenvironmental interpretations of paleosols. This concept of soil memory is that soils “remember” the environmental factors influencing their genesis and development. 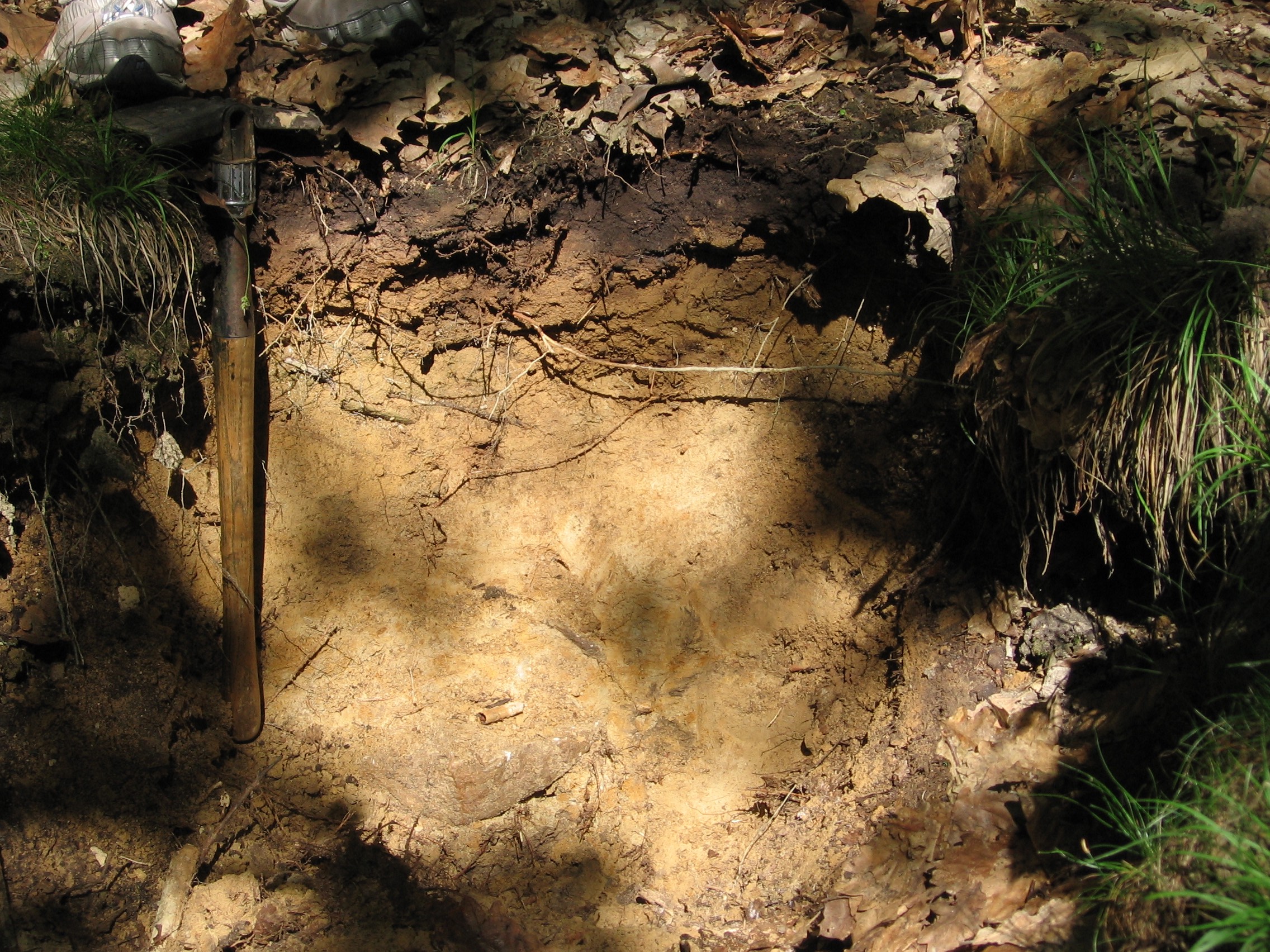 Carsten Lorz has used the memory of soils such as this one in Saxony, Germany, to reconstruct Quaternary pedogenesis.

The members of The Cooperative for the Humanities and Social Sciences are excited to host an upcoming Zoom webinar, "Universities, Youths, Race, and Policing."

Our webinar brings together four speakers who have diverse experiences in an array of fields, which they will use to explore the tensions between race and campus policing by asking "How can we promote racial equality and social justice in youth and campus policing?” Our panel includes members of both the University of Kentucky and Berea College faculty and staff, as well as members of the policing community, who will engage in several short presentations, followed by a question forum.

Where Does Soil Eroded From ATV Trails Go?

Off-road vehicle trails, especially those used extensively by ATVs (all terrain vehicles, four-wheelers, quads), are notorious for producing a lot of soil erosion. Over a period of several years, I was involved in a project funded by the U.S. Forest Service, to determine where the soil eroded from trails in the Wolf Pen Gap ATV trail system in the Ouachita National Forest, Arkansas was going. That the trails are eroding was never in question--the questions were how much and how fast, what the off-trail impacts on streams are, and where the eroded sediment goes. 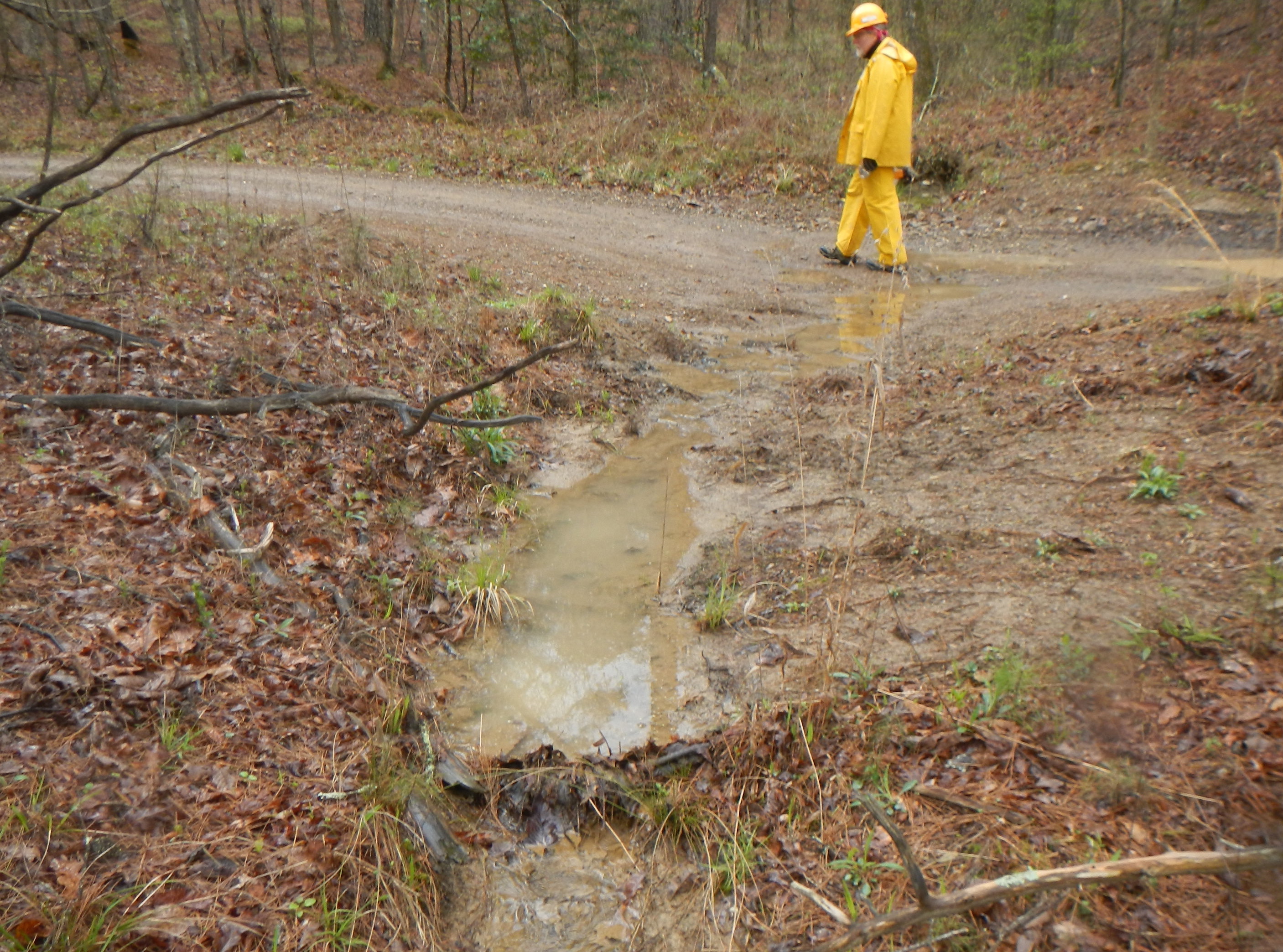 Sediment-laden runoff from an ATV trail in the Wolf Pen Gap complex near Mena, Arkansas.

The last of a series of articles based on this work has finally been published, as shown below! 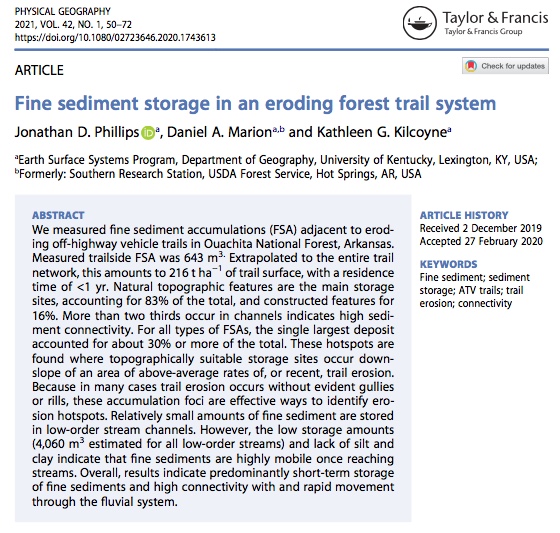 This was actually the second-to-last that we produced, but it took longer to get published. The last one was in print last year: 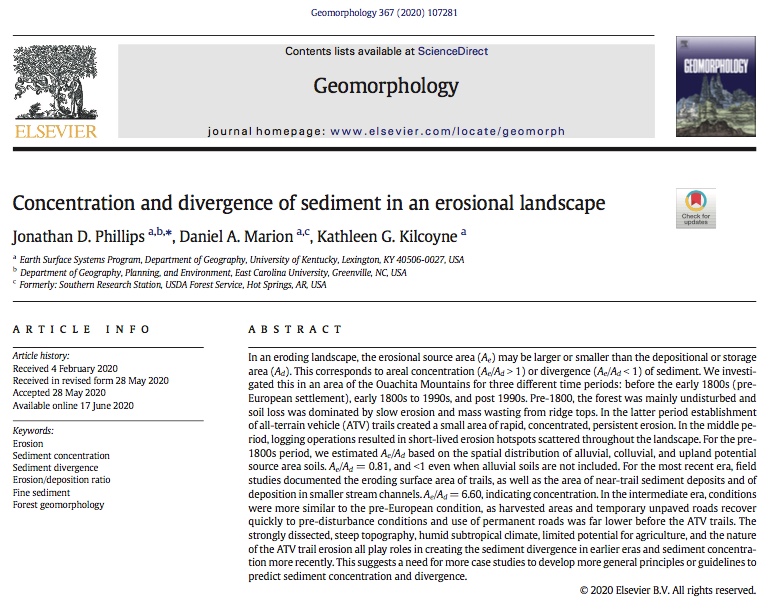 Every geomorphologist, soil scientist, farmer, backhoe operator or other person who digs holes in certain areas is familiar with them—floaters. I am not sure how widespread the terminology is, but the phenomenon is ubiquitous in areas where the regolith is derived mainly from underlying bedrock. Floaters are large rock fragments, unattached to underlying bedrock, within a soil or weathering profile. 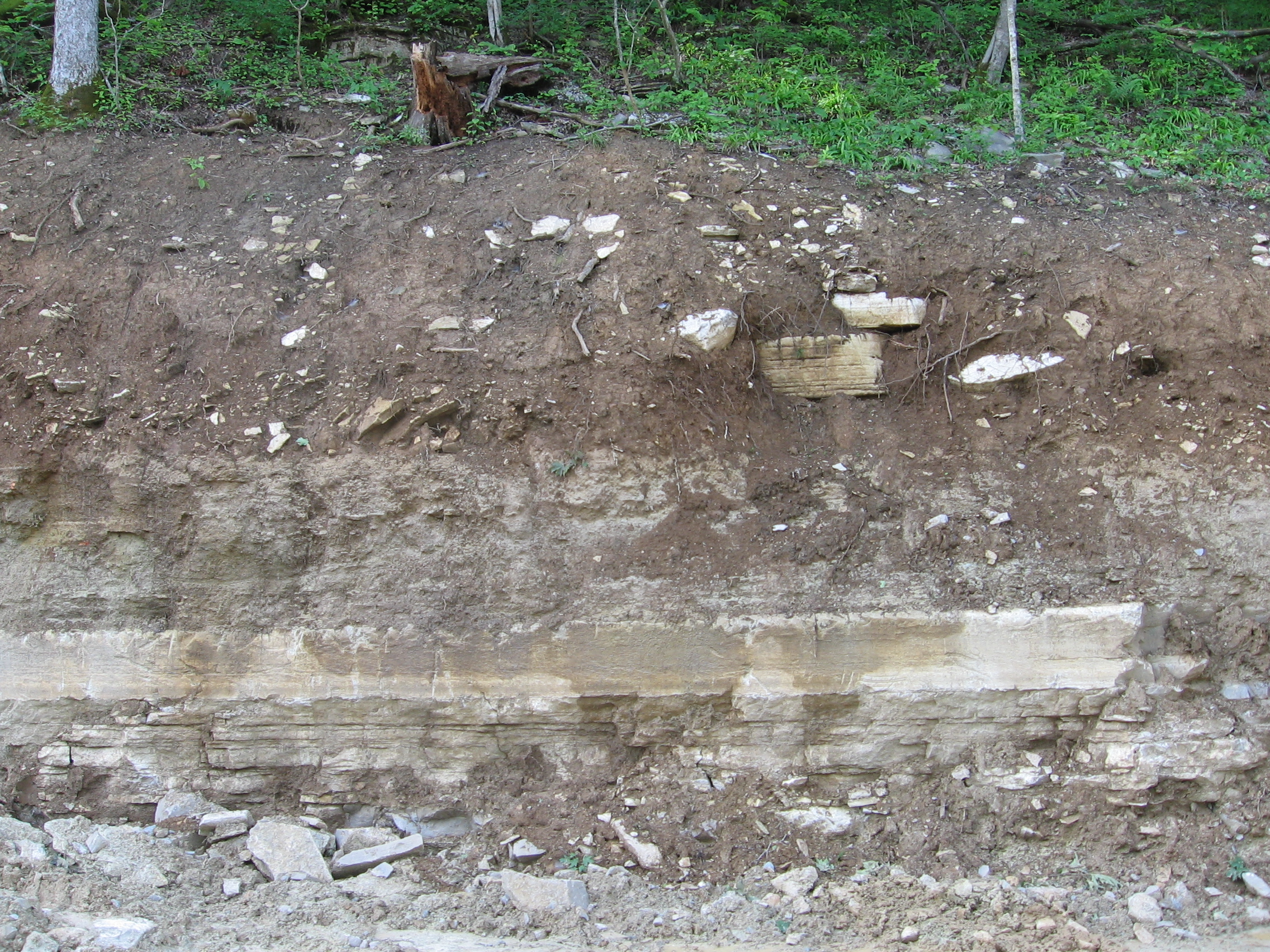 For farmers and excavators, floaters are mainly an annoyance. For pedologists and geomorphologists they can also be an annoyance. This is not only due to the difficulties they pose for digging and sampling, but because—particularly with augers, probes, and core samplers—they can easily be mistaken for underlying bedrock, resulting in underestimates of the depth and thickness of soils, regoliths, and weathering profiles.

But can these floaters tell us anything about weathering profile, critical zone, and regolith evolution?

This post continues the story of a collaboration with artist Petr Mores to combine scientific and artistic perspectives to tell stories of landscape evolution.

One of the first issues we encountered was that Petr, while wonderfully experienced in depicting nature from the ground up, was not accustomed to representing underlying soils and geology. Pavel and I, on the other hand (like many other pedologists and geomorphologists) are quite familiar with showing soils, regoliths, weathering profiles, and parent rock in the form of two-dimensional profiles and cross-sections, either in highly simplified forms or in annotated photographs. 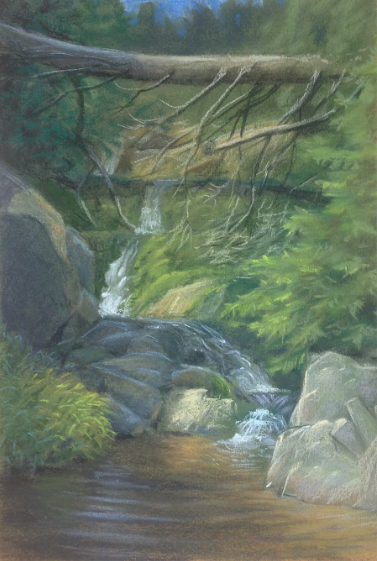 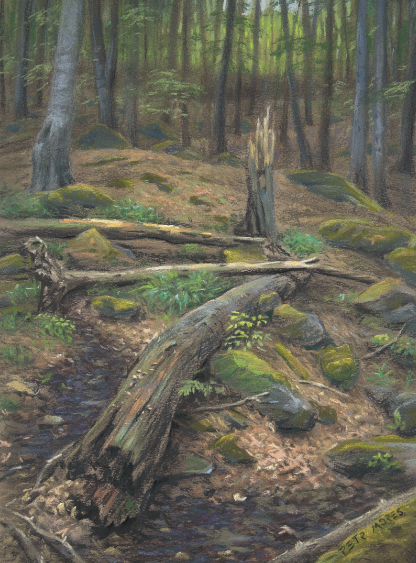 Scientific communication is, in essence, storytelling. When our intended audience is restricted to other scientists of similar interests and expertise, we have both more and less freedom. More in the sense that a certain baseline knowledge base can be assumed—thus basic principles do not have to be reviewed, terms defined, and justifications made. While the language standards for rigor and precision are pretty strict, those for beauty and entertainment value are very low (though some voluntarily exceed these!). Less freedom in that there exist some pretty strict norms with respect to professionally and sociologically acceptable ways to communicate—if you want to get published, you’d better either adhere to these or give a damn compelling reason in those (rare) cases when you don’t. A couple of my recent posts linking storytelling to scientific norms in the geosciences, or attempting to: Earth science historical narrative plotlines, and an analysis of landscape evolutionary pathway stories. 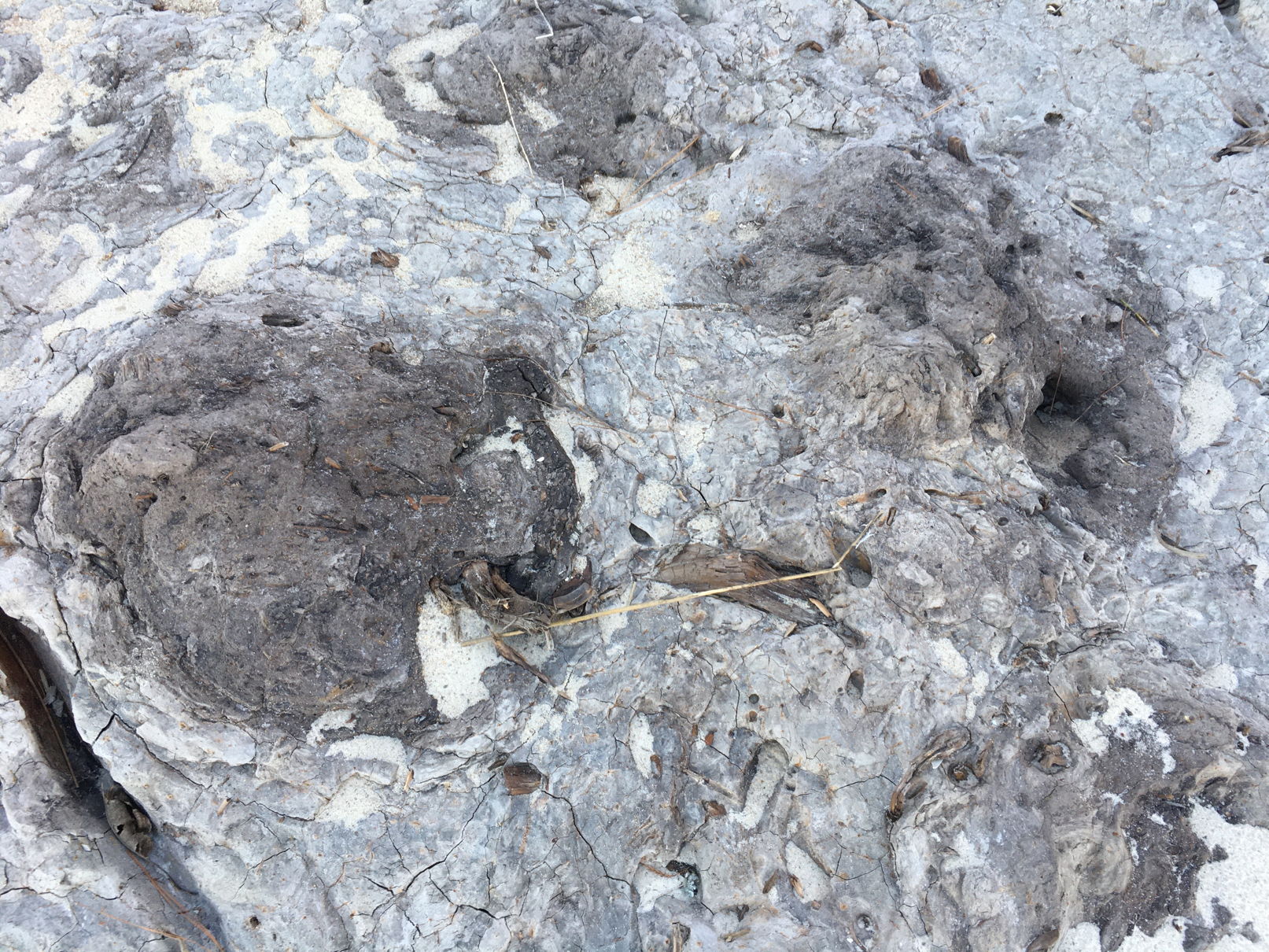 The Flanner Beach formation is a Pleistocene formation that outcrops in eastern North Carolina, mainly along the Neuse River estuary. The formation is known to geoscientists mainly for its depiction of a transgressive sedimentary sequence, and for its rich store of fossils.

At the base of the FB is a swamp paleosol; a dark, organic and clay-rich soil representing a freshwater swamp environment (more on this below). Above the swamp paleosol is a layer representing transition to a brackish environment, rich with fossil shells. This can be subdivided into zones containing fossils representing oligohaline, mesohaline, and polyhaline environments. Further up are stratified open-estuary sedimentary deposits, topped off by beach sands. The formation is about 200,000 years old.

This post is the third in a trilogy pondering the very real possibility that we have entered a “new normal” with respect to tropical storms and hurricanes, focusing in particular on relatively small storms on the Saffir-Simpson scale producing prodigious amounts of rain in the eastern Carolinas (part 1; part 2). Here I offer some additional thoughts. 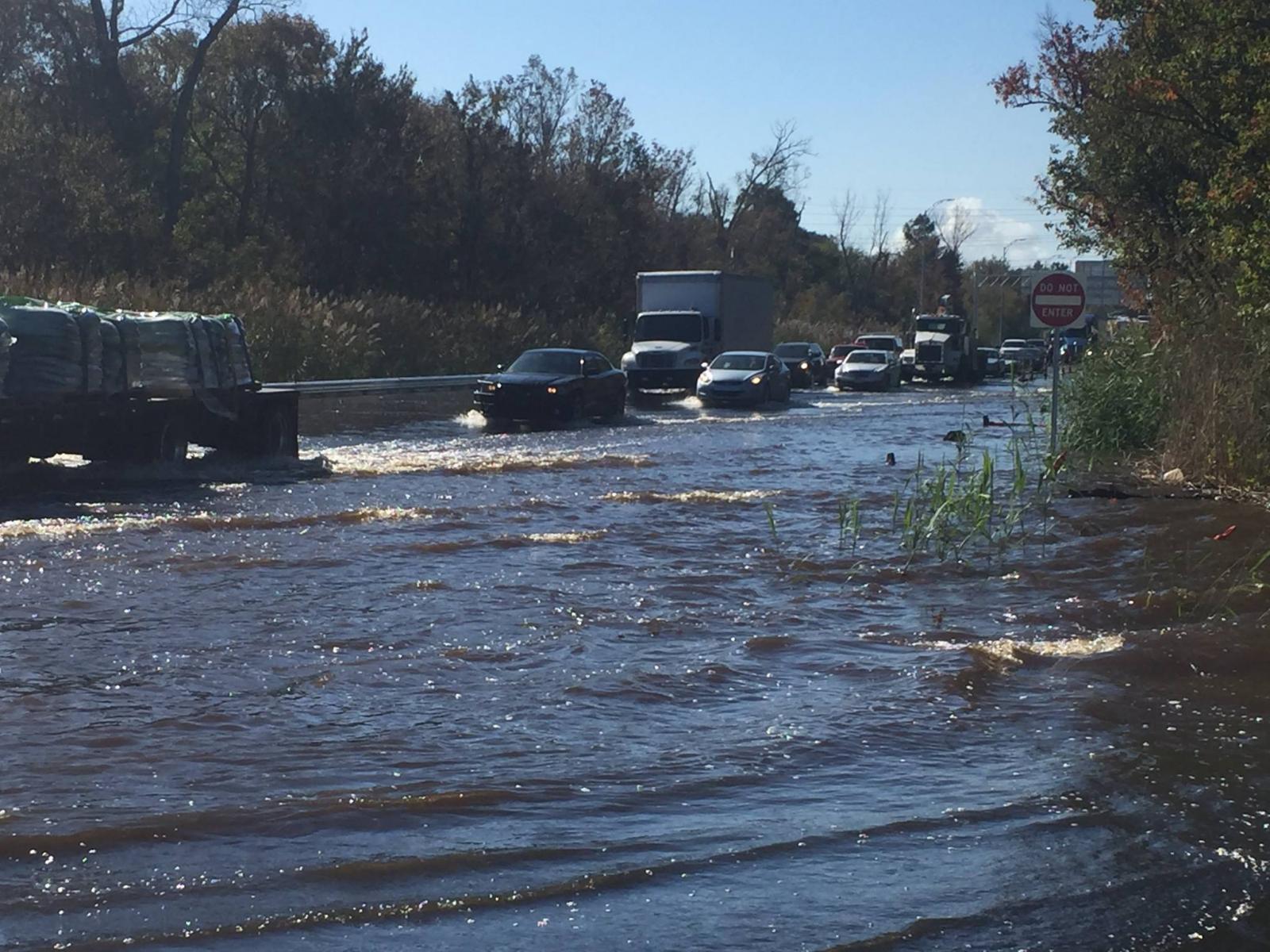 In my previous post I suggested, as have others, that we may be entering a “new normal” with respect to increasing precipitation associated with tropical cyclones. In eastern North Carolina and in south Texas we have empirical evidence in the form of Hurricanes Matthew, Harvey, and Florence in 2016-2018. Basic climatological principles suggest that the ongoing global warming will produce this result, and climate models bear this out.

The 100 largest area-averaged, multiple day precipitation events in the U.S. record from 1949-2018 were examined by Kunkel and Champion (2019).  Hurricane Harvey was the single largest event for an area sized 50,000 km2 and a duration of 4 days. Rainfall associated with Hurricane Florence ranked seventh. Almost all of the top 100 events occurred in the southeastern United States or along the Pacific coast. Hurricane Matthew (2016) resulted in 1-day rainfall records at Tarboro, Fayetteville, Lumberton, and Raleigh, NC and at Florence and Dillon, SC (Weaver et al., 2016). Hurricane Florence resulted in new peak streamflow records at 28 gaging stations in the Carolinas (Feaster et al., 2018).