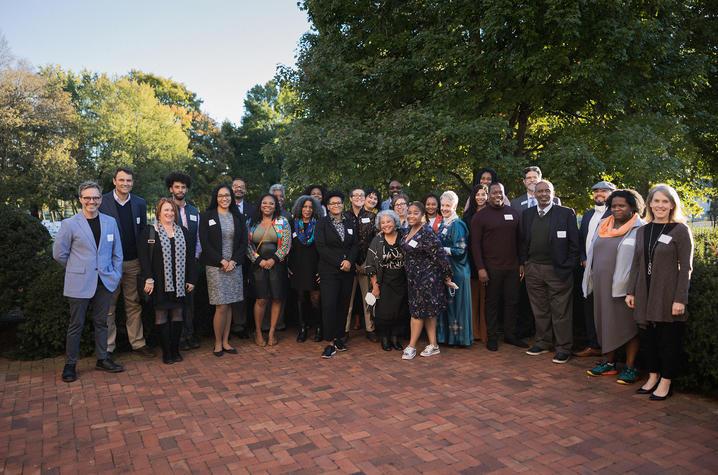 LEXINGTON, Ky. (Jan. 10, 2021) — The University of Kentucky is continuing its support for the new Commonwealth Institute for Black Studies (CIBS), based at UK.

Created with $250,000 of seed funding from the university last fall, the institute will now receive annual funding of $200,000 through UK’s Office for Institutional Diversity — an important step forward in helping the institute achieve its goals.

“Black studies is for everybody, and by funding the institute, UK is supporting all of us,” said Anastasia Curwood, director of CIBS and African American and Africana Studies (AAAS) at UK. “It's hard to find an issue in the Commonwealth of Kentucky and our present world that does not have a connection to Black studies. We can all gain clarity about where we are, where we've been and where we're going. That's why we named it the Commonwealth Institute — it is for the people of the Commonwealth and beyond.”

This funding helps establish the institute as a regional — and national — leader in the field of Black studies, said Derrick E. White, associate director of AAAS and CIBS affiliated faculty member.

“There are only a handful of institutes like CIBS in the nation, and most are considerably older,” White said. “Although we are brand new, we come in with a head of steam to really make a national impact, and I think that is being quickly seen — given the depth and quality of our faculty, the institutional support and a fantastic student body who is hungry for this kind of information.”

Housed in AAAS, a program in the UK College of Arts and Sciences, CIBS is a multidisciplinary research institute that serves as a think tank for Black studies. The institute hosts nearly 50 nationally and internationally recognized researchers with expertise in fields such as Black futures and 21st century race in digital cultures; slavery and inequality in Central Kentucky; race and sport; global Blackness (from Appalachia to Zimbabwe); and gender and sexuality in Black lives. CIBS also collaborates with, and is supported by, the United in True Racial Equity (UNITE) Research Priority Area. UNITE is five-year, $10 million commitment that was established last year to support UK research on racial disparities and inequity.

CIBS’ affiliated faculty represent 11 colleges across UK, and they are developing initiatives that look at intersections of Black studies within their colleges’ subject fields. These efforts help to diversify curriculums not only in the College of Arts and Sciences, but across campus.

“While CIBS is housed in Arts and Sciences, it’s a critical hub for the way in which the broader Africana experience can be explored,” White said.

“We want to be the epicenter of all of these efforts — bringing people together, connecting them to each other,” Curwood said. “Those who are interested in aspects of Black studies come to us, they find someone who shares their interests and then they have collaboration.”

The recurring funds allow CIBS to not only support these expansive faculty research programs and working groups, but also UK students, through high-impact experiences.

These includes paid internships, fellowships, research and education abroad experiences, and professional development opportunities — all of which can have significant impacts on student success.

The institute also brings important public programming to campus. Last spring, CIBS officially launched with a virtual address by American literary critic and scholar Henry Louis “Skip” Gates Jr., which was free and open to the UK community and the public. As director of the Hutchins Center for African and African American Research at Harvard University — the premier Black studies institute in the United States — Gates expressed his praise for CIBS and its faculty during his remarks.

This momentum has CIBS poised to become a significant leader in the field of Black studies — not only in Kentucky, but beyond. While the university funding is an important step, more support will be needed as CIBS grows.

“The university has signaled its commitment and has provided us with a floor in which we can grow,” White said. “And we fully expect that CIBS will grow tremendously in the future, to meet all the aspirational goals we have for research, our students and serving the public.”

For more information about CIBS, including ways you can support, visit https://cibs.as.uky.edu/.

The University of Kentucky is increasingly the first choice for students, faculty and staff to pursue their passions and their professional goals. In the last two years, Forbes has named UK among the best employers for diversity, and INSIGHT into Diversity recognized us as a Diversity Champion four years running. UK is ranked among the top 30 campuses in the nation for LGBTQ* inclusion and safety. UK has been judged a “Great College to Work for" three years in a row, and UK is among only 22 universities in the country on Forbes' list of "America's Best Employers."  We are ranked among the top 10 percent of public institutions for research expenditures — a tangible symbol of our breadth and depth as a university focused on discovery that changes lives and communities. And our patients know and appreciate the fact that UK HealthCare has been named the state’s top hospital for five straight years. Accolades and honors are great. But they are more important for what they represent: the idea that creating a community of belonging and commitment to excellence is how we honor our mission to be not simply the University of Kentucky, but the University for Kentucky.