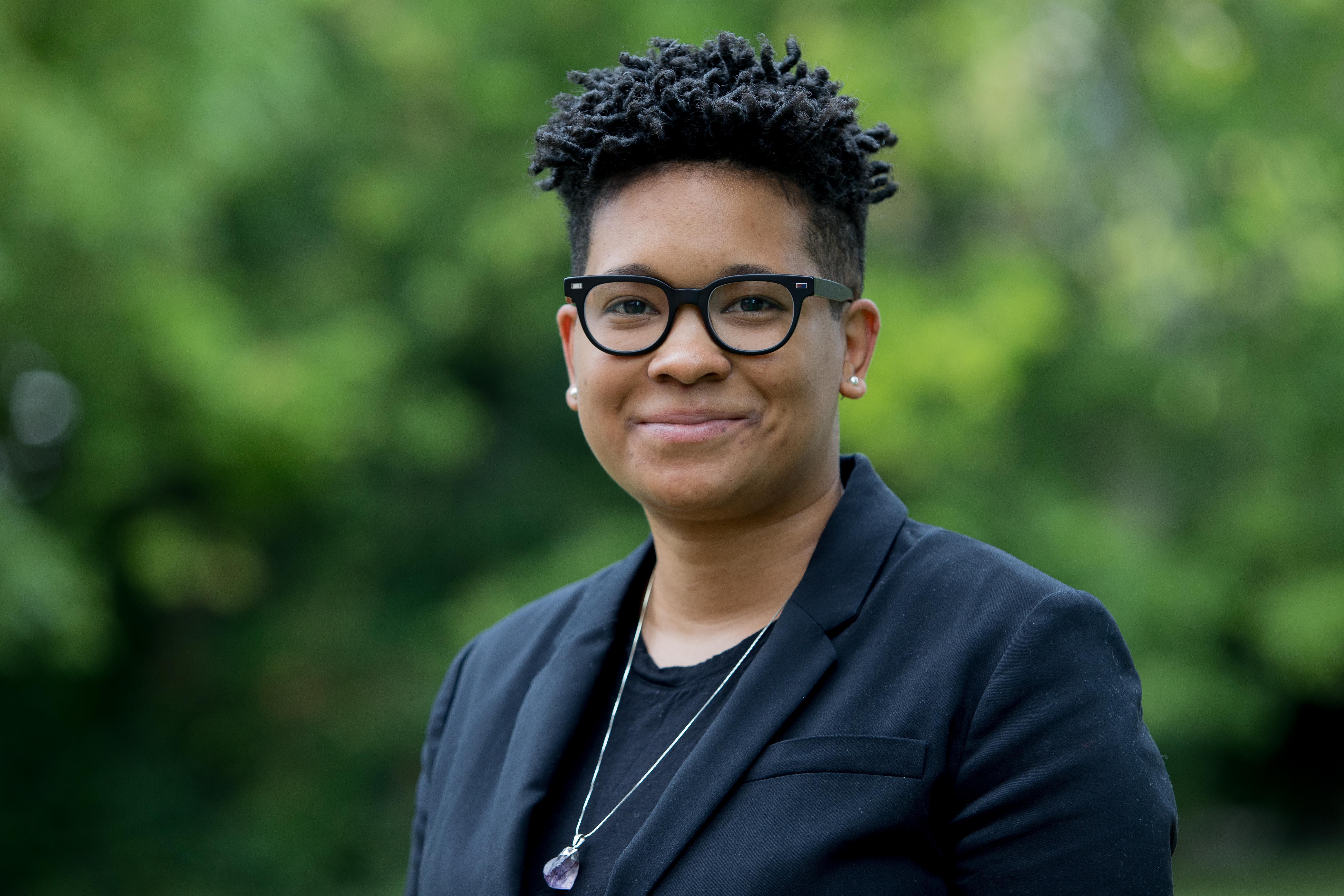 LEXINGTON, Ky. (June 19, 2020) ⁠— It’s been said that history can help us understand the present and inform the future.

The Civil War came to a close, but a number of African Americans across the United States remained enslaved — forced to continue as if freedom didn’t exist.

This was especially the case in Texas, where thousands of enslaved people weren’t freed until June 19, 1865. Their long-awaited celebration would serve as the foundation of Juneteenth.

Today, the holiday, which celebrates the abolition of slavery, coincides with protests across the U.S. against racial injustice. Society has become inspired to renew their interest in African American history — a legacy filled with tragedy, inequality, resilience and survival. We asked Vanessa Holden, an assistant professor of history and African American and Africana studies at the University of Kentucky College of Arts & Sciences, to share her expertise and insight.

UKNow: Amid calls to make it a national holiday, today marks the 155th commemoration of June 19. Please explain, what is Juneteenth?

Holden: The term Juneteenth is a combination of two words, the month “June” and the day “nineteenth.” On June 19, 1865, Major General Gordon Granger issued an order that placed Texas under U.S. military control — proclaiming an end to slavery in the then District of Texas. This delivered the promise of the Emancipation Proclamation to African Americans in Texas.

UKNow: In 1862, President Abraham Lincoln signed the Emancipation Proclamation announcing that slaves “shall be then, thenceforward, and forever free,” beginning on Jan. 1, 1863. Can you explain the history and significance of the proclamation?

Holden: The Emancipation Proclamation that President Lincoln issued in September of 1862 and that went into effect on Jan. 1, 1863, promised an end to slavery “…within any state or designated part of a state, the people whereof shall then be in rebellion against the United States…”

That is, Lincoln made clear that if rebelling states ⁠— those part of the Confederate States of America ⁠— did not rejoin the Union then he would empower the U.S. Military to free enslaved people as they recaptured ground during the American Civil War. Only those states in open rebellion against the U.S. were subject to the proclamation.

As my colleague Amy Murrell Taylor covers in her prize-winning book, “Embattled Freedom: Journeys Through the Civil War’s Slave Refugee Camps,” the Emancipation Proclamation excluded enslaved people who lived in border states like Kentucky and areas occupied by the Union Army.

The Emancipation Proclamation made the Civil War ⁠— as a matter of policy and not just personal conviction ⁠— a war to end slavery.

Lincoln also proclaimed: “And I further declare and make known, that such persons of suitable condition, will be received into the armed service of the United States to garrison forts, positions, stations, and other places, and to man vessels of all sorts in said service.” He explicitly allowed for the recruitment and use of Black troops in the Union Army, making it possible for Black men to bring freedom to enslaved people as active duty troops.

UKNow: However, Juneteenth commemorates a more obscure date two years after the Emancipation Proclamation – June 19, 1865. Why is that?

Holden: Emancipation was a prolonged and dynamic process. African Americans freed themselves by fleeing to Union army camps at the start of the Civil War. The Emancipation Proclamation promised abolition to some enslaved African Americans. The 13th Amendment ⁠— an amendment to formally end slavery everywhere in the United States ⁠— passed in Congress on Jan. 31, 1865. It then went through the ratification process to add it to the U.S. Constitution. Amendments need ¾ of states to ratify them before they can be added to the Constitution. At the time, that meant that 27 of 36 states, including those being re-admitted to the Union, needed to ratify the amendment. Slavery persisted in states that did not secede from the Union as the 13th Amendment went through the ratification process

It took occupation by federal troops to force emancipation in Texas. By June of 1865, the 13th Amendment was still moving through the ratification process. But, in Texas — a state that fell under the Emancipation Proclamation’s stipulations — slavery should have ended as soon as the Civil War ceased in April of 1865. With federal military occupation, enslavers could no longer hold African Americans in bondage.

UKNow: Slavery was formally abolished on Dec. 6, 1865. Freed people marked June 19 the following year, kicking off the first celebration of Juneteenth. On this anniversary, why should Kentuckians acknowledge slavery’s deep roots?

Holden: For the Commonwealth, the story of emancipation is an even more prolonged case. Kentucky did not secede from the U.S. and remained in the Union during the Civil War.

Kentuckians fought on both sides of the American Civil War — making the Commonwealth the site of armed conflict. Within Kentucky’s borders, self-emancipated people sought refuge at contraband camps in hopes of living free when the war ended. In western Kentucky, some African American communities recognize Aug. 8 to mark emancipation. According to oral histories, news of the Emancipation Proclamation arrived in the region on that day in 1863, an example of how African Americans fashioned freedom for themselves despite enslavers who worked to keep them enslaved.

The Emancipation Proclamation did not apply to Kentucky because it did not leave the Union. After the 13th Amendment went to the states for ratification, Kentucky did not ratify it. Instead, federal law forced enslavers in Kentucky to emancipate enslaved people in December of 1865 when the 13th Amendment had the approval of ¾ of the states.

UKNow: More than a century later, how does emancipation still resonate with society today?

Holden: Most people learn very little about the era of emancipation. Most Americans don’t know that there isn’t one Emancipation Day but, instead, many dates that marked the end of slavery in different regions and states.

UKNow: In 1980, Texas was the first state to establish Juneteenth as a state holiday. How has it become more widely recognized since then — on a national and global scale?

Holden: It is a very regional celebration. In other Black communities, and in different global contexts, different dates have significance. Today, because of increasing engagement with the history of race in America, more people are interested in the history of both slavery and emancipation. Juneteenth stands out as perhaps the largest emancipation celebration.

UKNow: In commemorating this day, we are also forced to face one of the most painful parts of our national history. How can we — as a country and a state — continue to heal from our past?

Holden: Beyond the importance of learning about Kentucky’s history, it is vital to acknowledge emancipation as a prolonged process. Learning from how Black people and white allies strategized, fought for, and won freedom can help guide us in the present.

History doesn’t repeat itself; people do. And taking a hard look at the systems that reinforce inequality ⁠— many of which are descended from an era of emancipation politics and violence ⁠— can help us foster meaningful change.

UKNow: It’s increasingly apparent, we are still grappling with America’s legacy of slavery. Why is it more important — perhaps than ever before — to celebrate Juneteenth? And how can we do so in a way that encourages progress?

Holden: I think celebrating emancipation means acknowledging slavery ⁠— its brutality and its evil. Odd as it sounds, there are many people who would like to think slavery “wasn’t as bad” in Kentucky or that “Kentucky was better than some states.” But, there was no type of slavery that was not abhorrent. The bloodshed and sacrifice that it took to rid the U.S. of slavery are worth remembering. The courage of African Americans who self-emancipated deserves acknowledgement. And you can’t do any of that without admitting that slavery was evil without equivocation.

UKNow: Is there anything else you would like to add?

Holden: I’d like to recommend the following books for those who are interested in the history of emancipation in Kentucky:

Holden previously shared her expertise on the history of slavery in Kentucky in a separate article. You can view the Q&A, titled “400 Years Since slavery Began: ‘History is Full of Beginnings, the Present can be one too,’” at this link.