My research focuses on migrations and cross-border mobilities, borderland communities, refugees, ethnic identities and informal economies in Africa. In addition to articles published in various journals, my book entitled Border Jumping and the Control of Migration in Southern Africa was recently published by Indiana University Press. Relying on extensive fieldwork in the Zimbabwe-South Africa border zone, as well as research at the British Library (London), the National Archives of Zimbabwe (Harare), the National Archives of South Africa (Pretoria) and archives of The Employment Bureau of Africa (TEBA) located in the Special Collections of the University of Johannesburg Library (Doornfontein Campus), the book examines how border jumping came to be a salient feature of the Zimbabwe-South Africa border's cultural milieu.

I have also co-authored a book on African Immigrants in Kentucky, which was published by University Press of Kentucky. Based almost entirely on oral interviews with differently positioned African migrants in Kentucky, this book provides a refreshing look at people's movements from postcolonial Africa to the United States, the highly debated concept of Africanity, as well as migrants' struggles with and the joys of maintaining connections with "home" while pursuing their dreams in America.

Before joining the University of Kentucky, I taught at the University of Zimbabwe and held a Visiting Scholar Fellowship at the Five Colleges African Studies Program in Amherst, Massachusetts. In addition, I have also served as a Research Associate at the African Center for Migration and Society, University of the Witwatersrand in South Africa and as a Writing Fellow at the Johannebsurg Institute for Advanced Study. 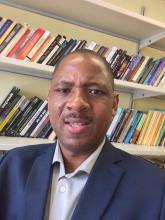