Melissa N. Stein is an associate professor in the Gender and Women’s Studies Department at the University of Kentucky. Prior to coming to UK, she completed postdoctoral fellowships at the Rutgers University Center for Race & Ethnicity and in the Gender Studies Department at Indiana University. She received her BA from Franklin & Marshall College and her PhD in History from Rutgers University in 2008, specializing in African-American and women’s/gender history. While at Rutgers, Stein was also a graduate fellow at the Institute for Research on Women, an Excellence Fellow at the Institute for Health, Health Care Policy, and Aging Research, and head research assistant at the Center for Race and Ethnicity. Her publications include essays on "Science" in the Routledge History of American Sexuality (Routledge Press, 2020), "Whiteness" in Oxford Bibliographies in African American Studies (Oxford University Press, 2019), “Race as a Social Construction” and “Class” in Black Women in America (Oxford University Press, 2005), and on “Misogyny” in The Encyclopedia of Women in World History (Oxford University Press, 2007), and an article, “‘Nature is the author of such restrictions’: Science, Ethnological Medicine, and Jim Crow,” in The Culture of Jim Crow: Rethinking the Segregated South, 1880-1920, edited by Stephanie Cole and Natalie Ring (Texas A&M University Press, 2011).

Stein’s first book, Measuring Manhood: Race and the Science of Masculinity, 1830-1934 (University of Minnesota Press, 2015), is a gendered analysis of scientific racism in nineteenth and early twentieth century America that interrogates biomedical constructions of citizenship, investigates the relationship between racial and sexual sciences, and examines scientists’ attempts to offer medical solutions to the nation’s “race problems.”

Measuring Manhood is the book we’ve been hoping for. For two generations, historians have talked about the ways that race, class, and gender are interlocking and co-operational. Carefully and thoughtfully, Melissa N. Stein gathers these plots and lays out a story of intersecting interests and ideologies: a story of knowledge gone mad that is deeply resonant in our time. —Matthew Pratt Guterl, Brown University

Smartly conceptualized and engagingly written. —Journal of the History of Medicine and Allied Sciences

Measuring Manhood is well-written and complexly argued. It will be a useful text for courses in the history of medicine, gender, and sexuality studies; American history and science and technology studies. It provides an example of how to do intersectional analysis. —Men & Masculinities

A masterful work on the way racial theory, gender and science came together in the long nineteenth century. —Social History of Medicine

A noble effort to reveal the intersections of race, gender, and sexuality in the history of American science. —American Historical Review

A well-written narrative, Measuring Manhood is a welcome contribution to the histories of science and medicine, race, and sex and sexuality as well to the interdisciplinary fields of American studies and gender studies.—Journal of American History

By analyzing the gendered dimension of racial science, this deeply researched book is a unique contribution to the history of race, gender, and science. It will be of interest to Africana studies scholars, historians, and also a range of interdisciplinary scholars interested in the history of racial inequality as it intersects with health...Measuring Manhood offers fresh insight into the power of science to shape popular discourse, culture, and politics, and provides an important and instructive framework for reflecting on contemporary research on human diversity and race. —African American Review

One of Stein’s main contributions is her use of feminist and queer theories to reveal new layers of American race-making. However, this book is more than an intervention into how sex, gender, and race are intertwined. At the outset, Stein writes that she “seeks to unpack not just the genealogy of racial science, but also its reception and social function” (17). Measuring Manhood does just that...Overall, Measuring Manhood is a sobering reflection on the fallacies of “objective” research and the role science has played in shaping social and political life. In this present era of advanced genetic research and considerable sociopolitical turmoil, this is a cautionary tale. —New Genetics and Society

Dr. Stein has also begun work on a second book project, tentatively titled (Dis)Membering MOVE: Race, Memory, and the Meaning of Disaster. This project critically examines the 1985 MOVE disaster, in which the Philadelphia police department, with authorization from the mayor, responded to a stand-off with a black liberation group the city was trying to evict from its communal house in West Philadelphia by dropping a firebomb on the roof, burning the house to the ground and killing eleven MOVE members, five of them children. In the process, they also burned down an entire block of the predominantly African-American neighborhood, leaving 61 houses destroyed and 250 people homeless. Though often called a “cult” by the media, the story of MOVE is not nearly as well known today as Ruby Ridge or Waco, and when it is recalled in the national media or consciousness at all, it is typically dis-remembered as a racial event--not unlike Hurricane Katrina more recently. This erasure extends to the academy as well; while the 30th anniversary of the MOVE disaster is approaching, there has been surprisingly little scholarship about it, despite recent interest in race and the police state. The project, then, interrogates the dissonance between national and local memory of MOVE, the ways in which the story was covered then and now, and how media coverage and the incident’s imprint in the popular imaginary conform to and disrupt common racial--and gendered--tropes.

“‘Nature is the author of such restrictions’: Science, Ethnological Medicine, and Jim Crow”—published in The Folly of Jim Crow: Rethinking the Segregated South, 1880-1920 (Texas A&M University Press, 2012)

GWS 600--The Body in History and Culture

GWS/HIS 506--History of Sexuality in the United States 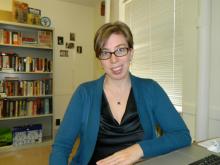