Nikki Brown has been teaching American and African American history since 1999.  She majored in History at Oberlin College, and she earned a PhD in History from Yale University in 2001.  Her book, Private Politics and Public Voices:  Black Women’s Activism from World War I to the New Deal (Indiana University Press) won the Letitia Woods Brown Award for Best Book in African American Women’s in History in 2006.  The major themes in Dr. Brown’s work are: gender, race, identity, representation, and politics.  Dr. Brown is also a professional photographer, and is has recently completed a photography project on African American men in New Orleans after Hurricane Katrina.  She is currently working on a book about Louisiana’s Civil Rights Movement.  Dr. Brown travels often to Turkey, where she taught Civil Rights history and American Women’s history in 2014 for one semester and 2018-2019 for the academic year, as a Senior Lecturer with the Fulbright/CIES Program. She is also preparing an oral history of the Afro-Turks, the African descendants of slaves in the Ottoman Empire.

You can view Dr. Brown's photographs at: https://nikkibrownphotographs.zenfolio.com/.

Second printing, Jim Crow: A Historical Encyclopedia of the American Mosaic with ABC-CLIO as a single volume, Fall 2014.

“In the wake of the storm: Mentoring programs, community groups, and a new civil rights movement after Hurricane Katrina.” The Black Scholar, Volume 45, Issue 3, 2015. 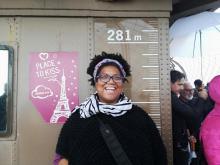